We completed yet another obedience class with Edison last night.  While the classes help up practice Edi's social skills, the trainers always tell us that we have all the tools and that we just need to keep practicing. 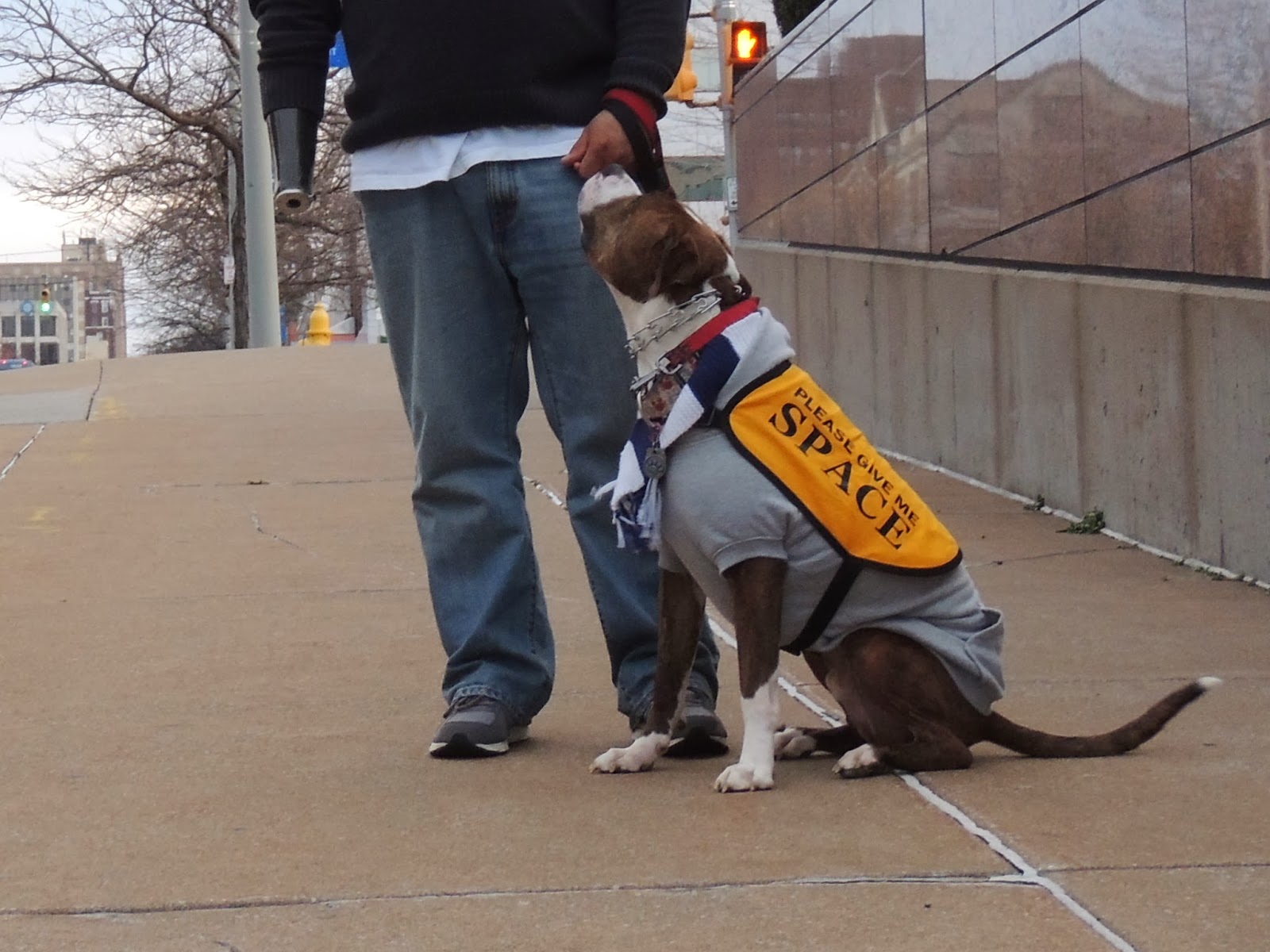 And while we are all about sharpening Edison's skills, it just seems like there's some trick that we haven't learned yet.  That there's some simple technique that will pull it all together and give us the dog that we know Edison can be. 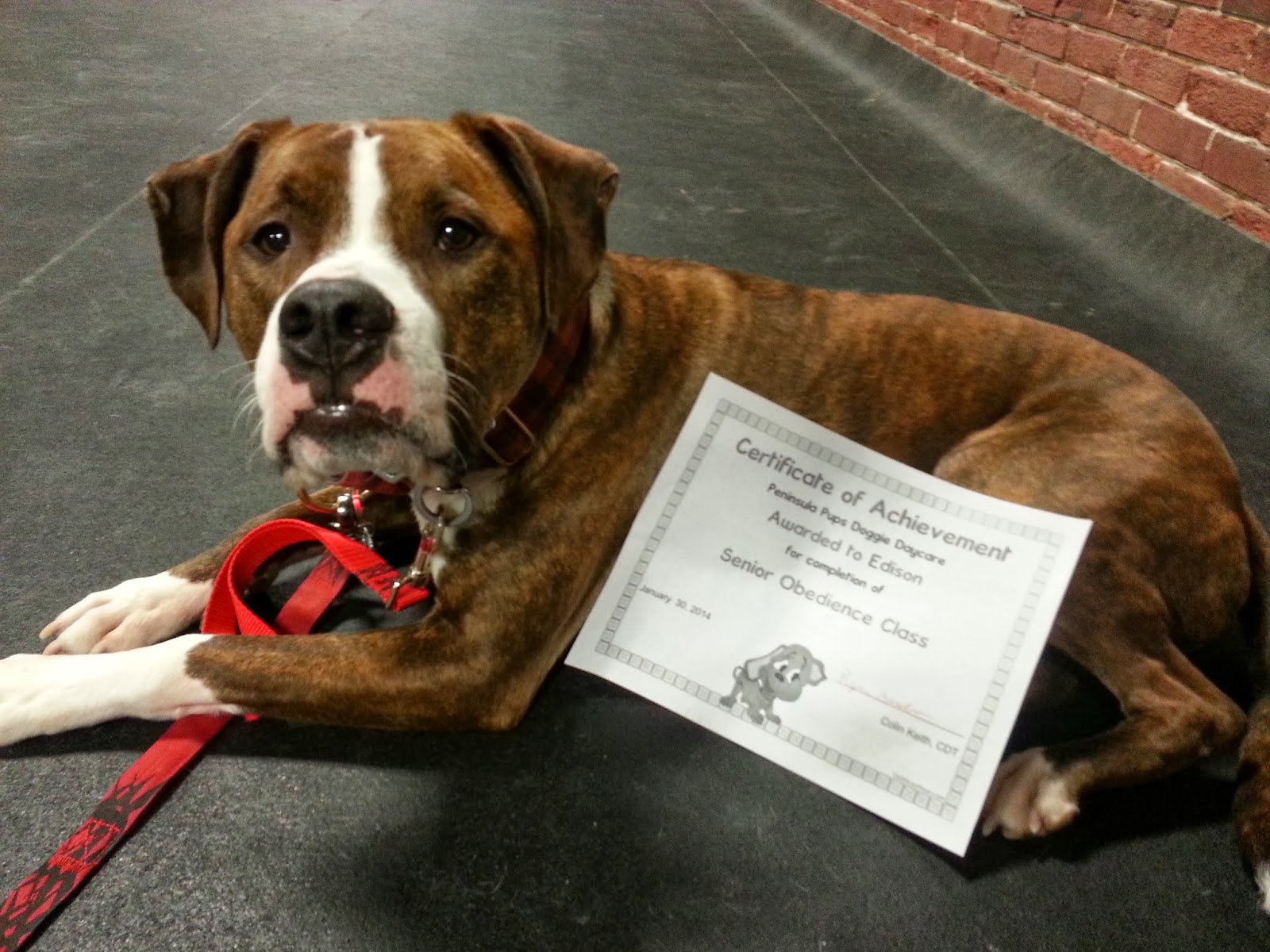 
Posted by Hannah@Eriesistibull at 6:00 AM 5 comments:

One thing we've noticed about the pooches is that they seem to have a sixth sense about when we are coming home. 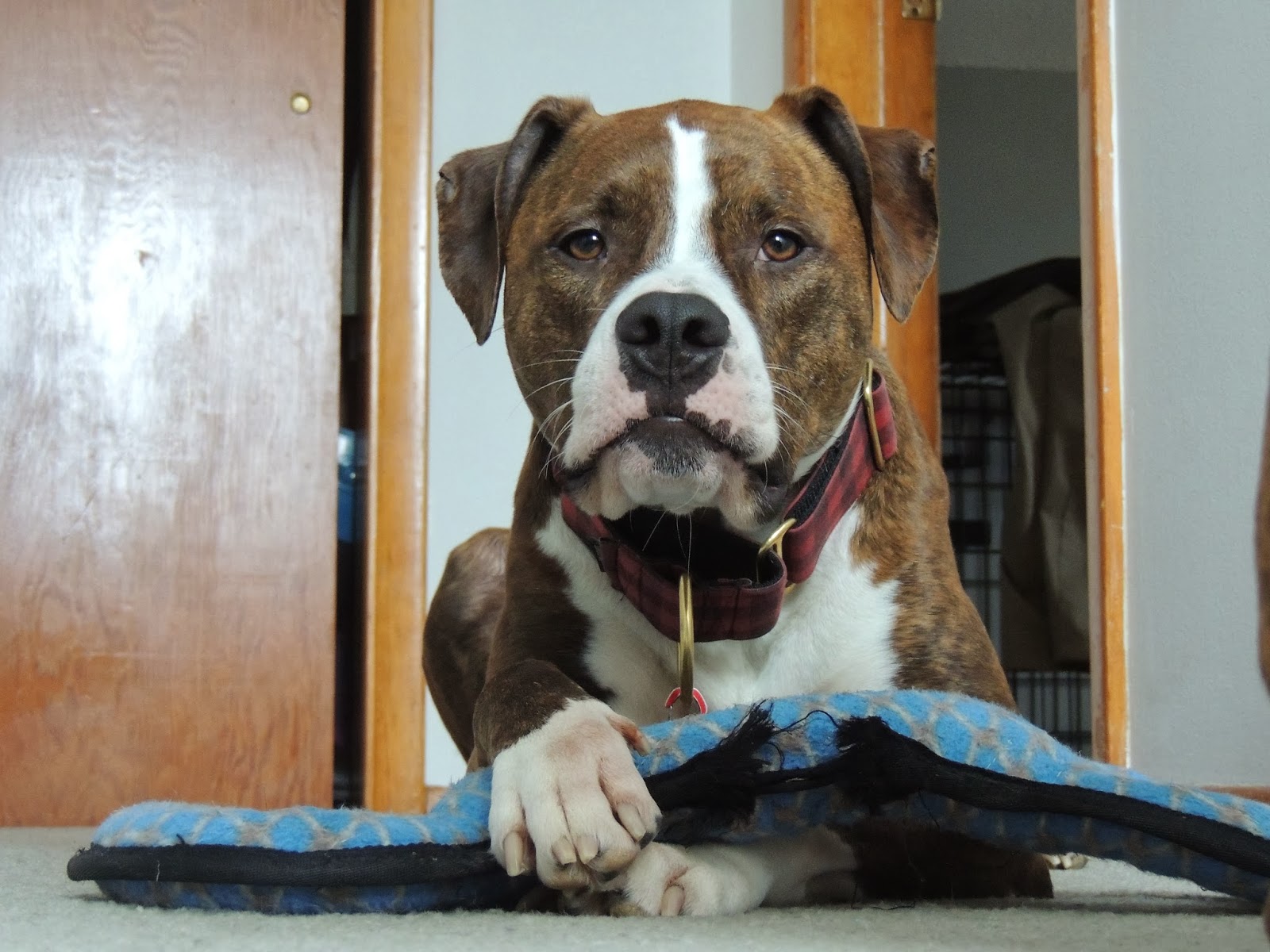 Sam noticed it first.  Tesla would perk up and run to the back door long before I ever pulled in the driveway. 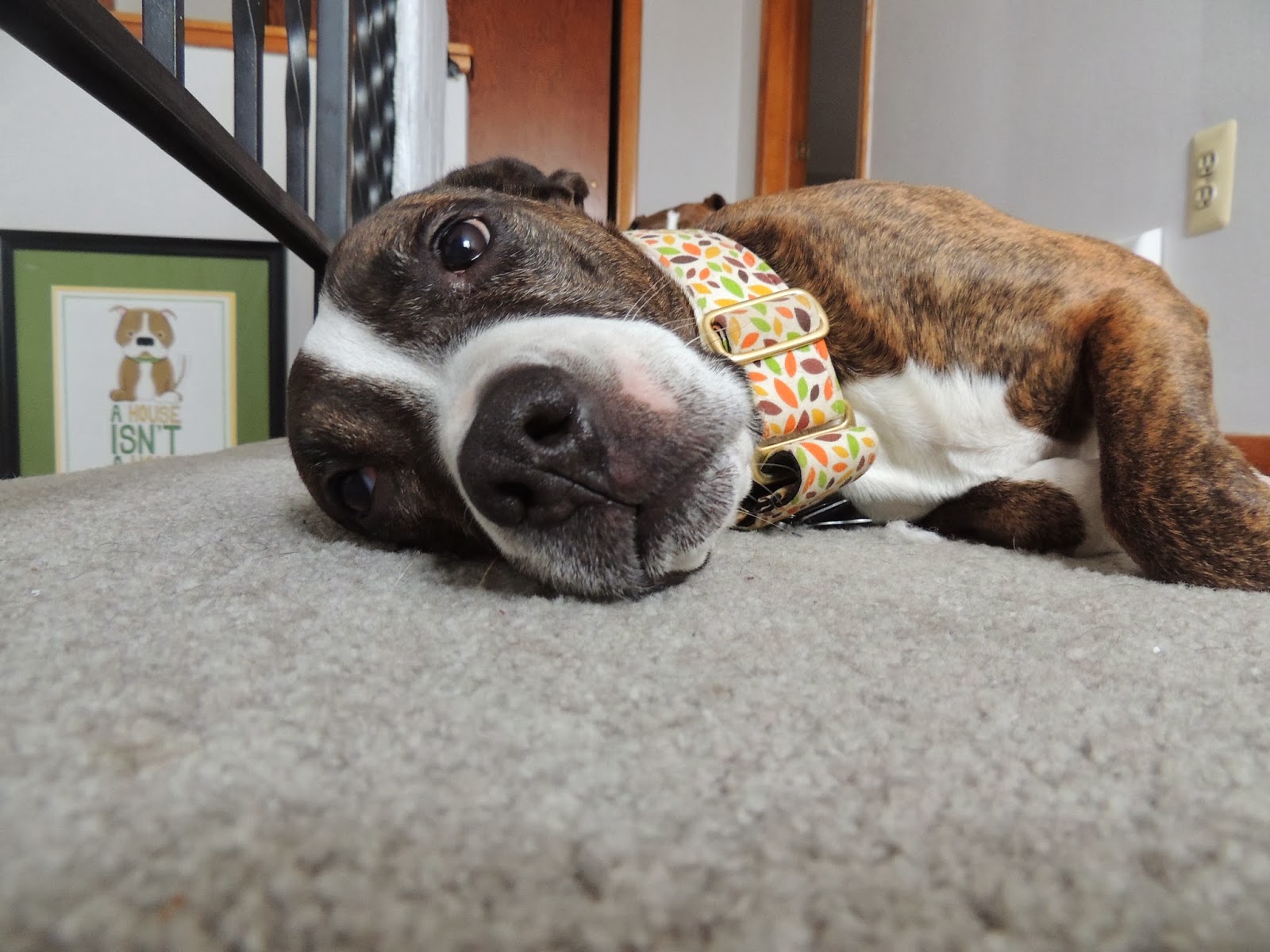 I've noticed at other times, Tess running back to greet Sam long before he arrives. 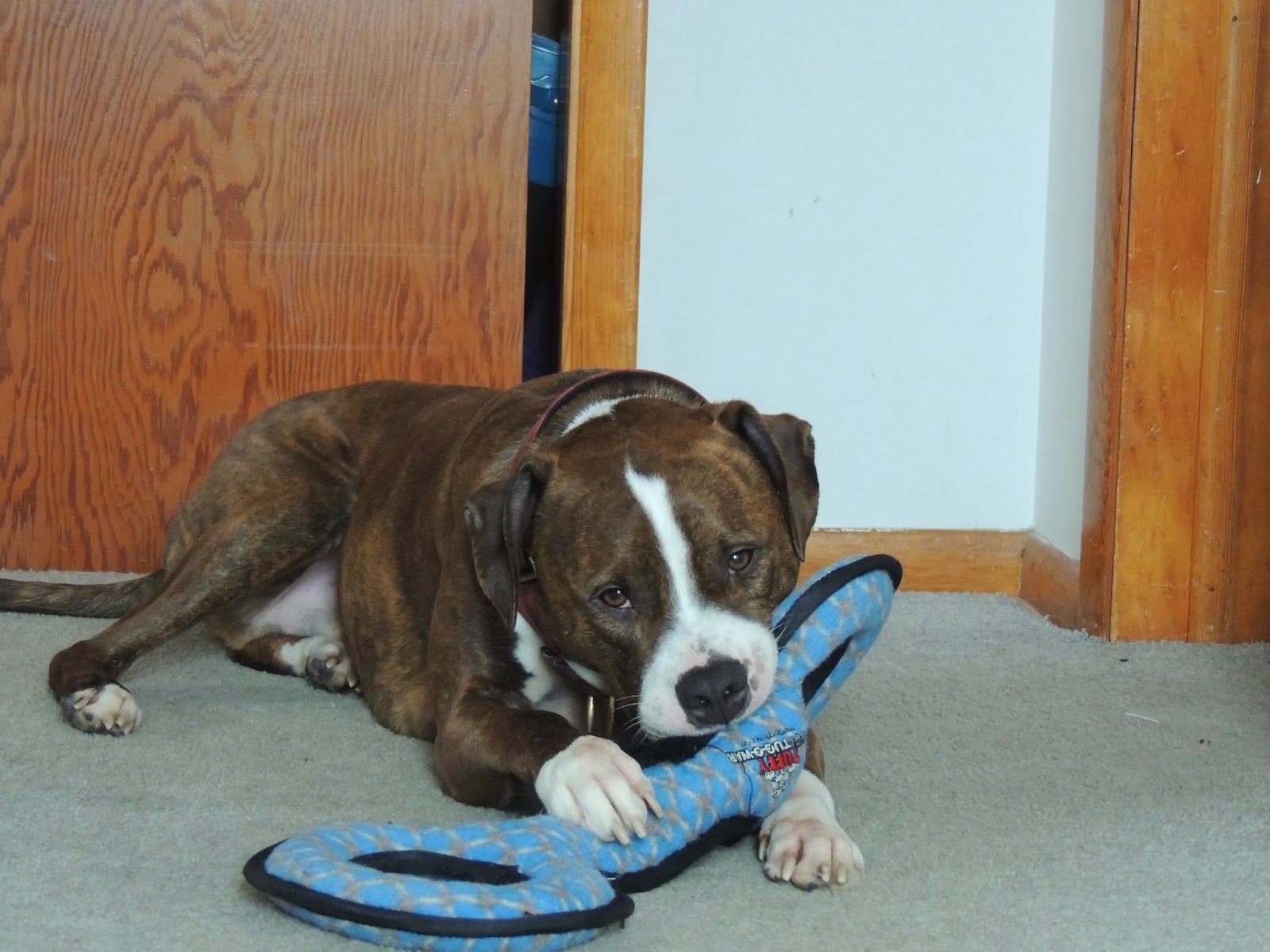 I don't know if Edison is picking up on Tess's clairvoyance or just following his sister, but he's been anticipating our arrivals lately, too. 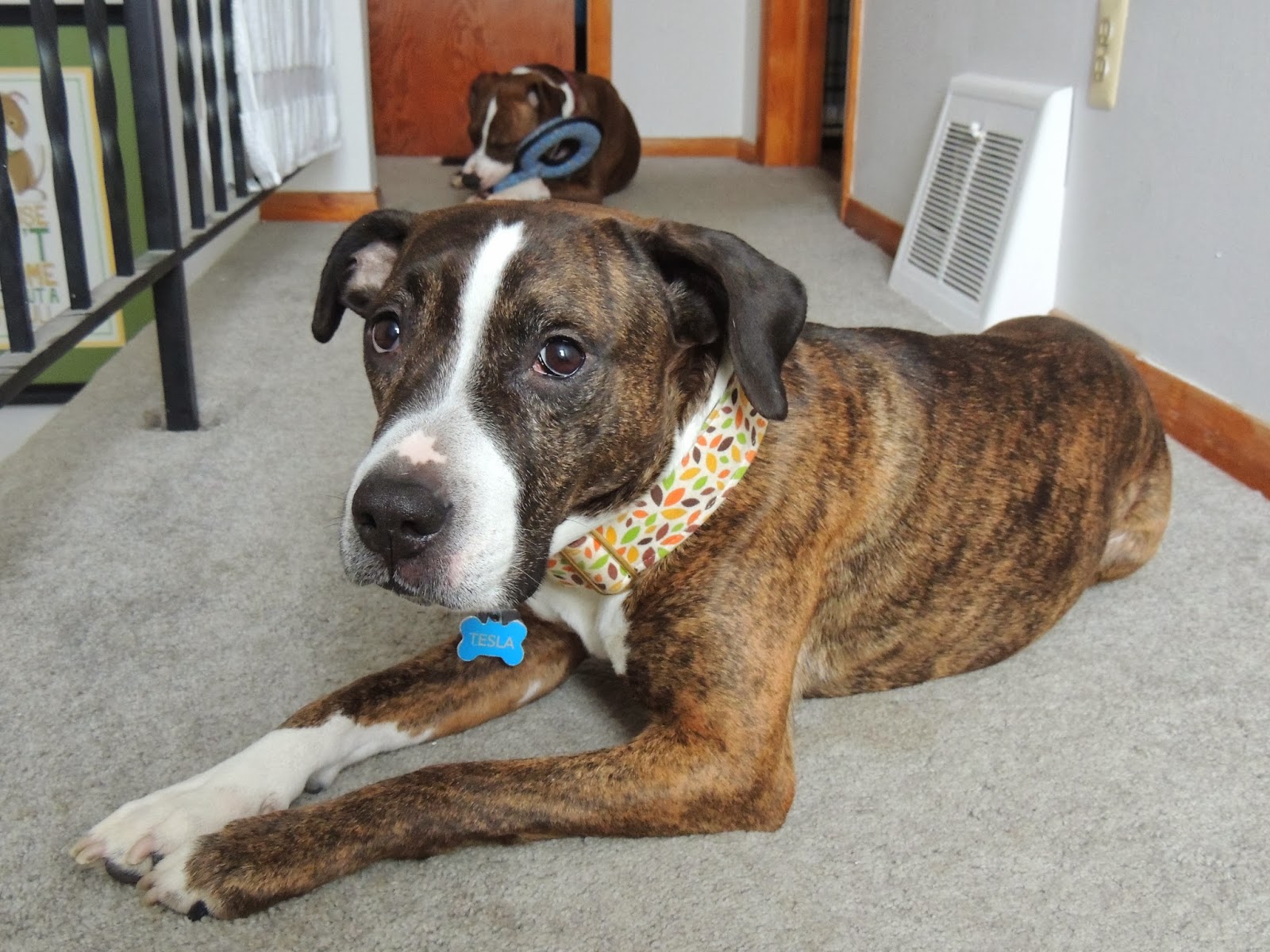 Does your pooch predict the arrival of loved ones?
Posted by Hannah@Eriesistibull at 6:00 AM 6 comments:

We all know how expensive our pooches can be.  Between the food, training sessions, and of course, the accessories, the cost really adds up. 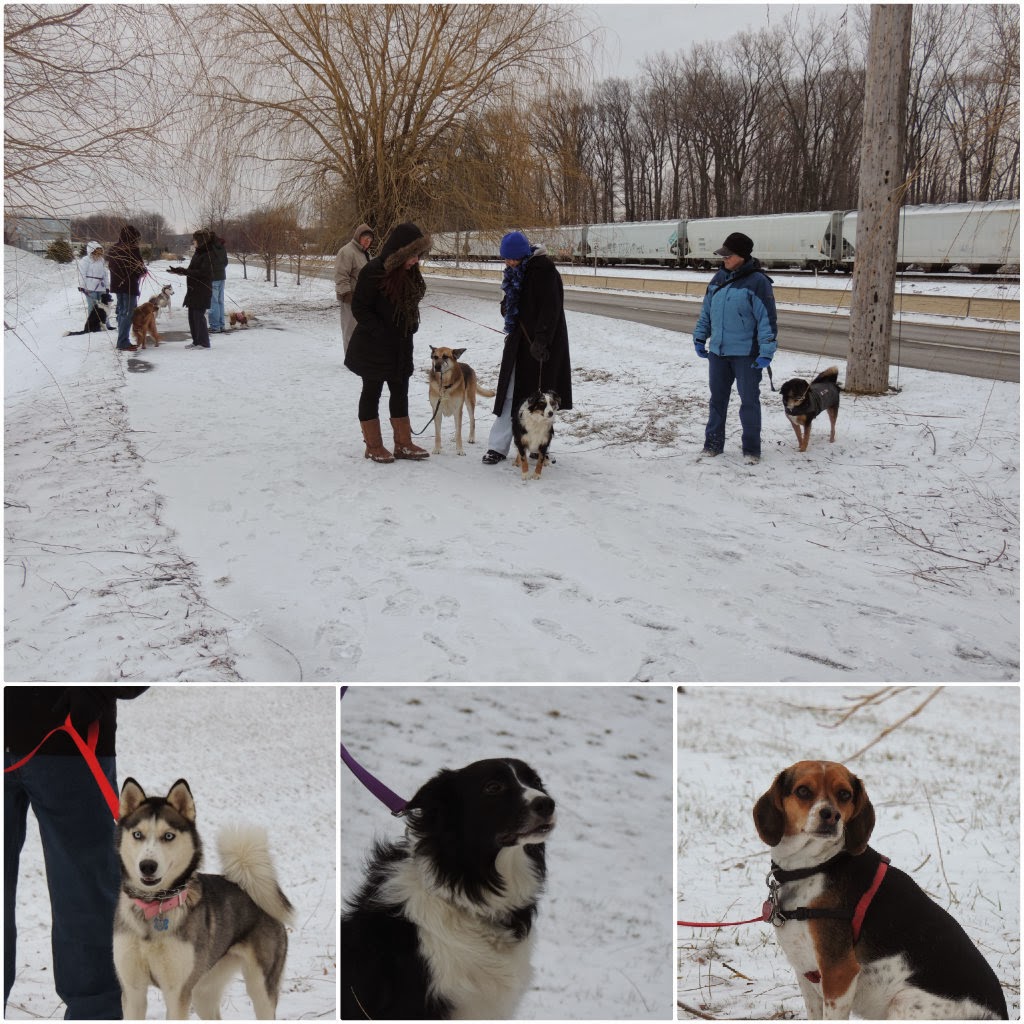 When trying to add socialization in there, it could really break the bank!  We love the positive benefits that things like doggy daycare provides, but for some that is really not do-able.   Of course we are so lucky to have a free social hour spot in Erie, but one thing that we love about our weekly walks is that it is one of the few free resources available to dogs and their owners. 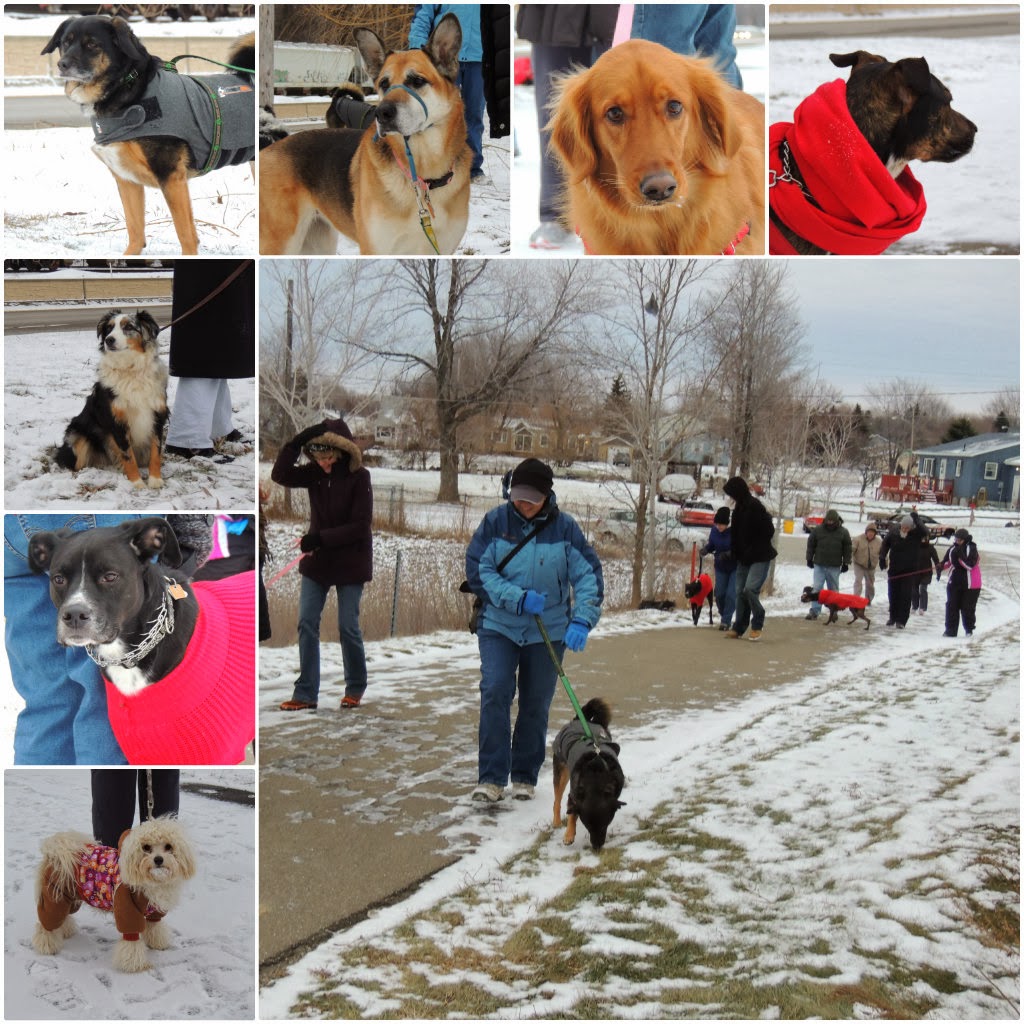 What free ways do you socialize your pooches?
Posted by Hannah@Eriesistibull at 6:00 AM No comments:

A common piece of advice for owners bringing home a new dog is to make and keep their routines.  We've found that our pooches have a few of their own routines that they've developed. 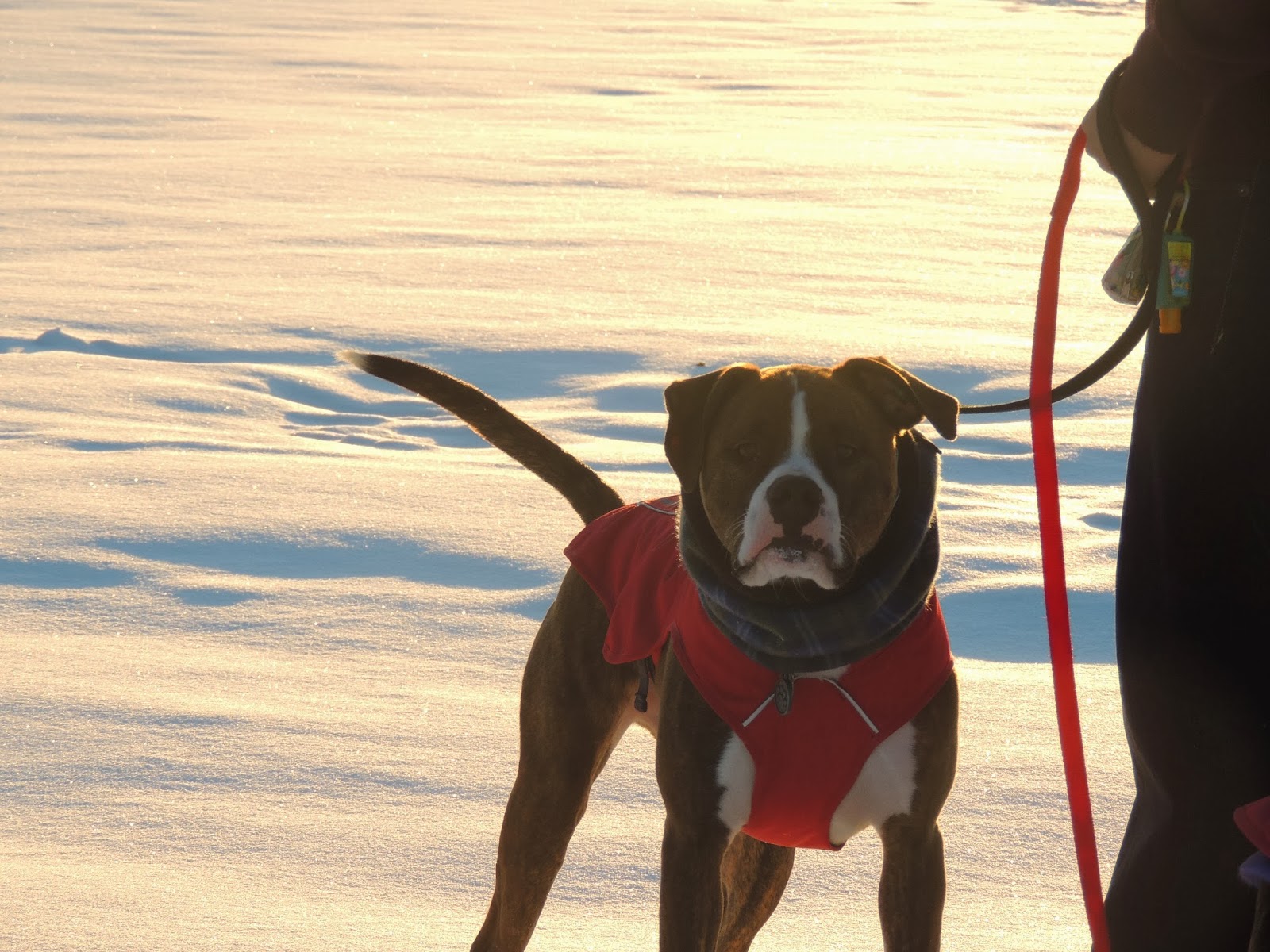 In the morning before we head downstairs, we make the pooches wait for us before heading down the stairs.  Edison takes this so seriously that he will walk between us and the top landing as if telling us to hurry up because he is hungry.  One downstairs, unless directed otherwise, Edison waits (standing up) very closely to his food bowls until after we put down his water dish.  Then he will lie down to wait for his food bowl. 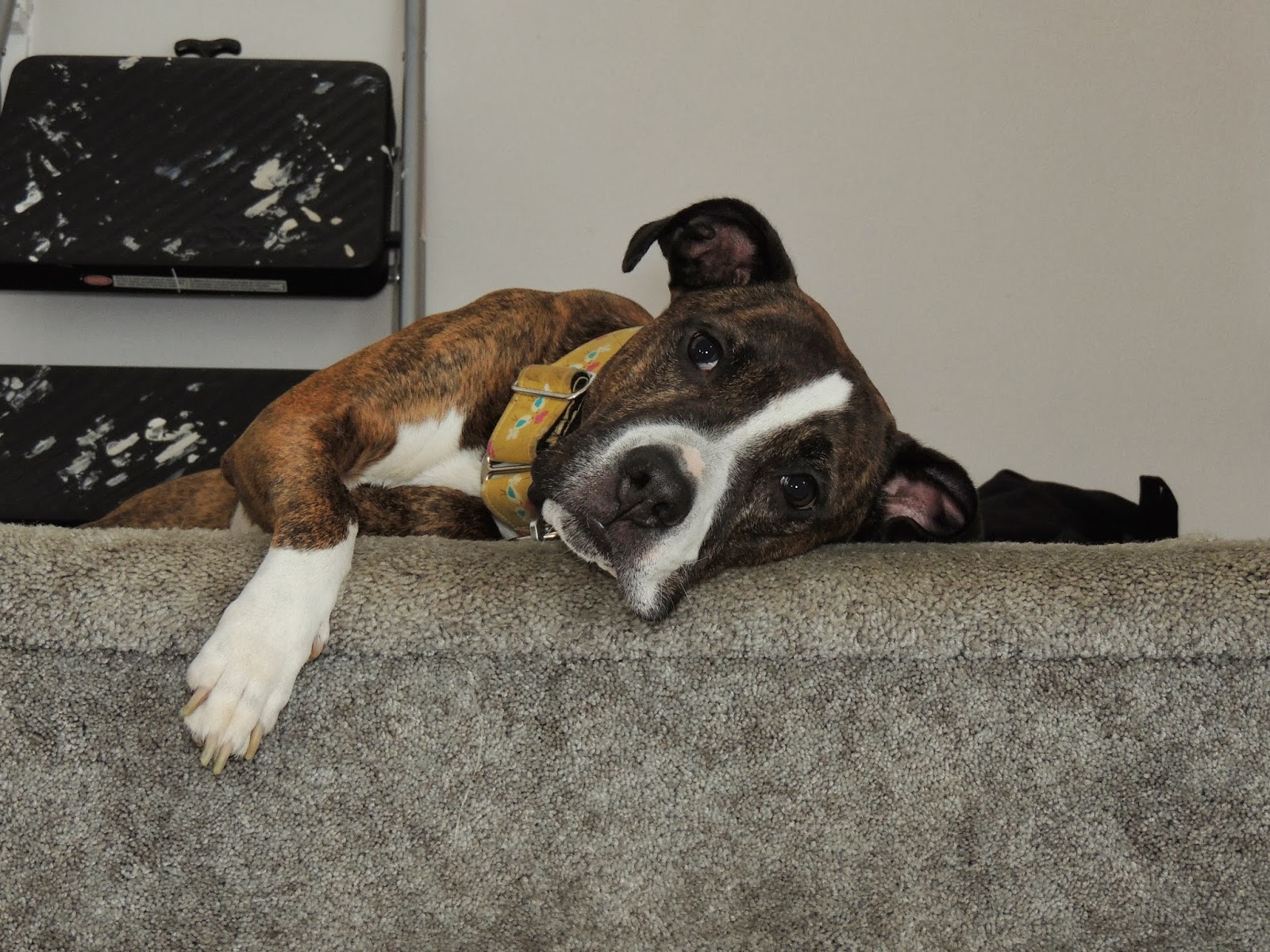 We've talked before about Tesla's routines that she has that are borderline obsessive compulsive including her bathroom routine and car routine. 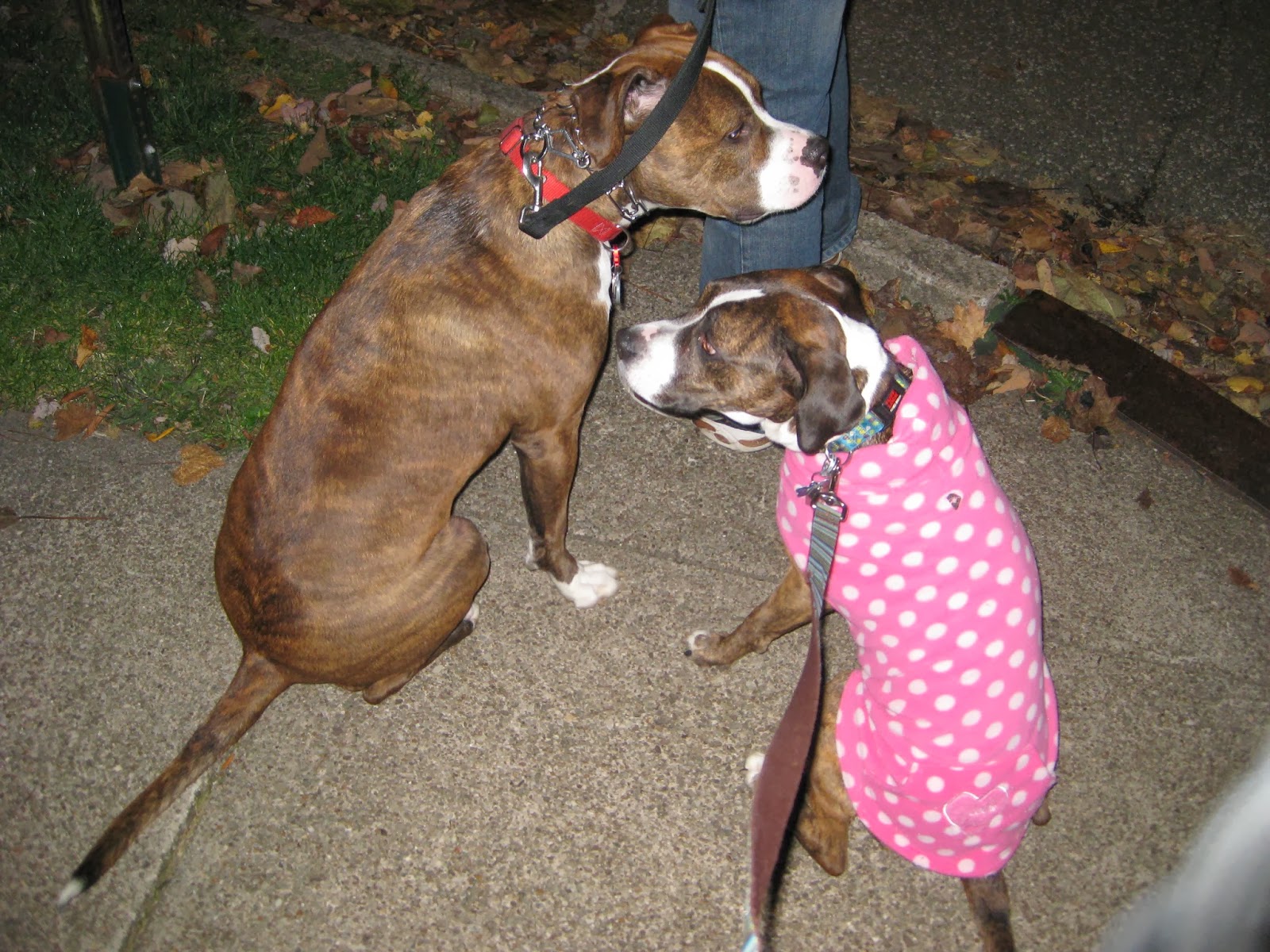 In the morning, Sam is the first one to get out of bed.  If he gets up and puts on sweatpants, Edison will continue laying in bed.  As soon as Sam puts on his dress pants though, Edison is up and ready to start his day. 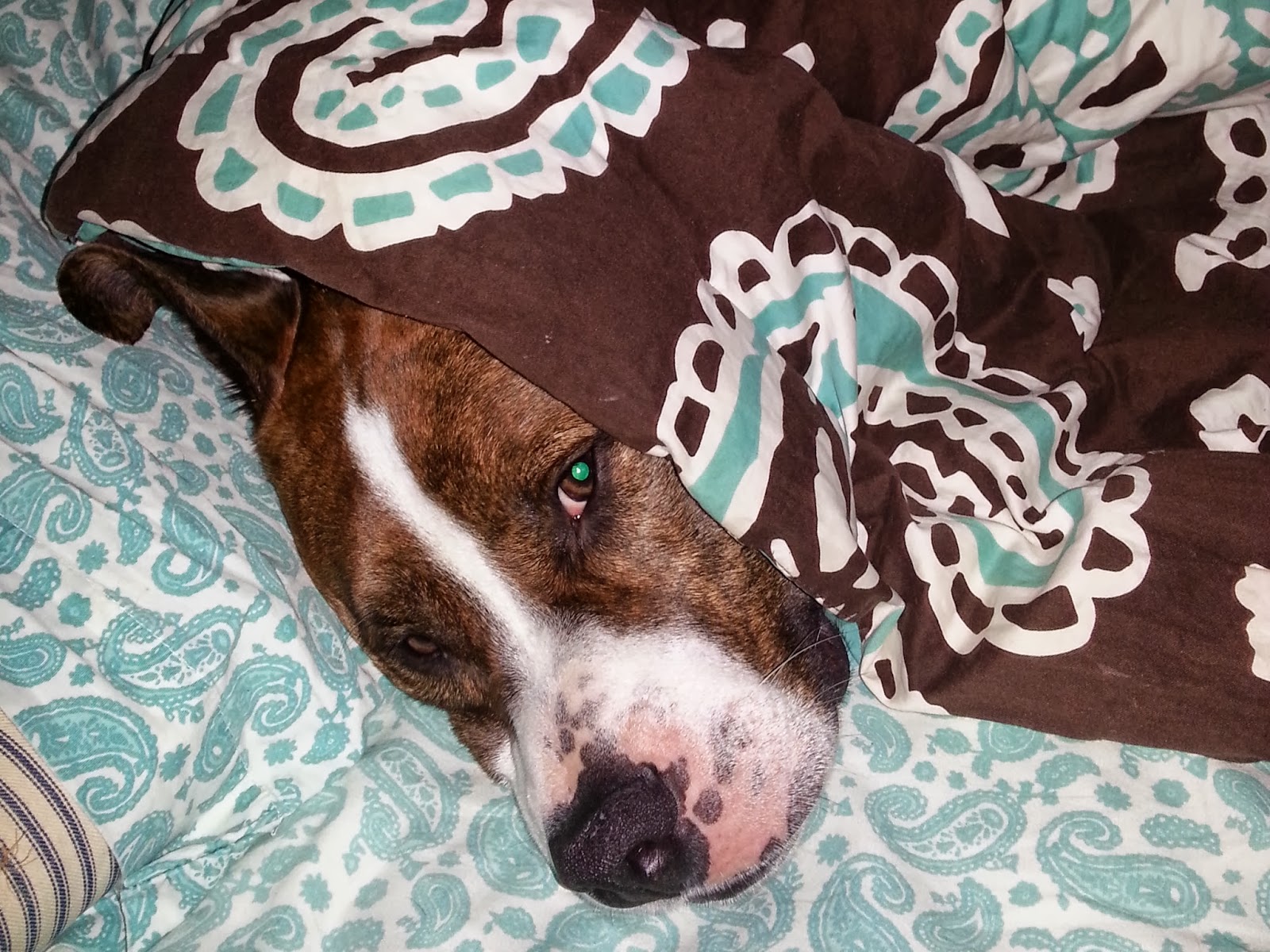 What sort of routines have your pooches created for themselves?
Posted by Hannah@Eriesistibull at 6:00 AM 3 comments:

Email ThisBlogThis!Share to TwitterShare to FacebookShare to Pinterest
Labels: routines

The Time Tess Ran Away from Home

As we said here, Tess doesn't like being crated in new surroundings.  So when we first moved into my house, I didn't force her into her crate and accepted the fact that there would be pee when I got home. 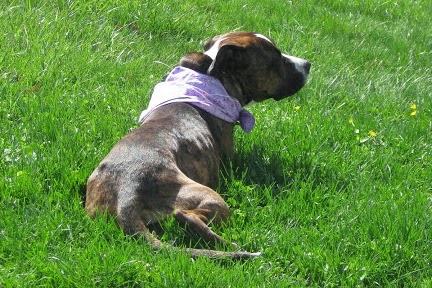 I got a call about an hour later from our vet saying that someone had her, and they gave us his number.  I was confused, but I ran right back and picked her up.  Looking back on it, I'm guessing he called the vet instead of me because she had her old ID tag on -- one without an address (I had previously lived in temporary housing) and an out-of-area phone number (my cell phone). 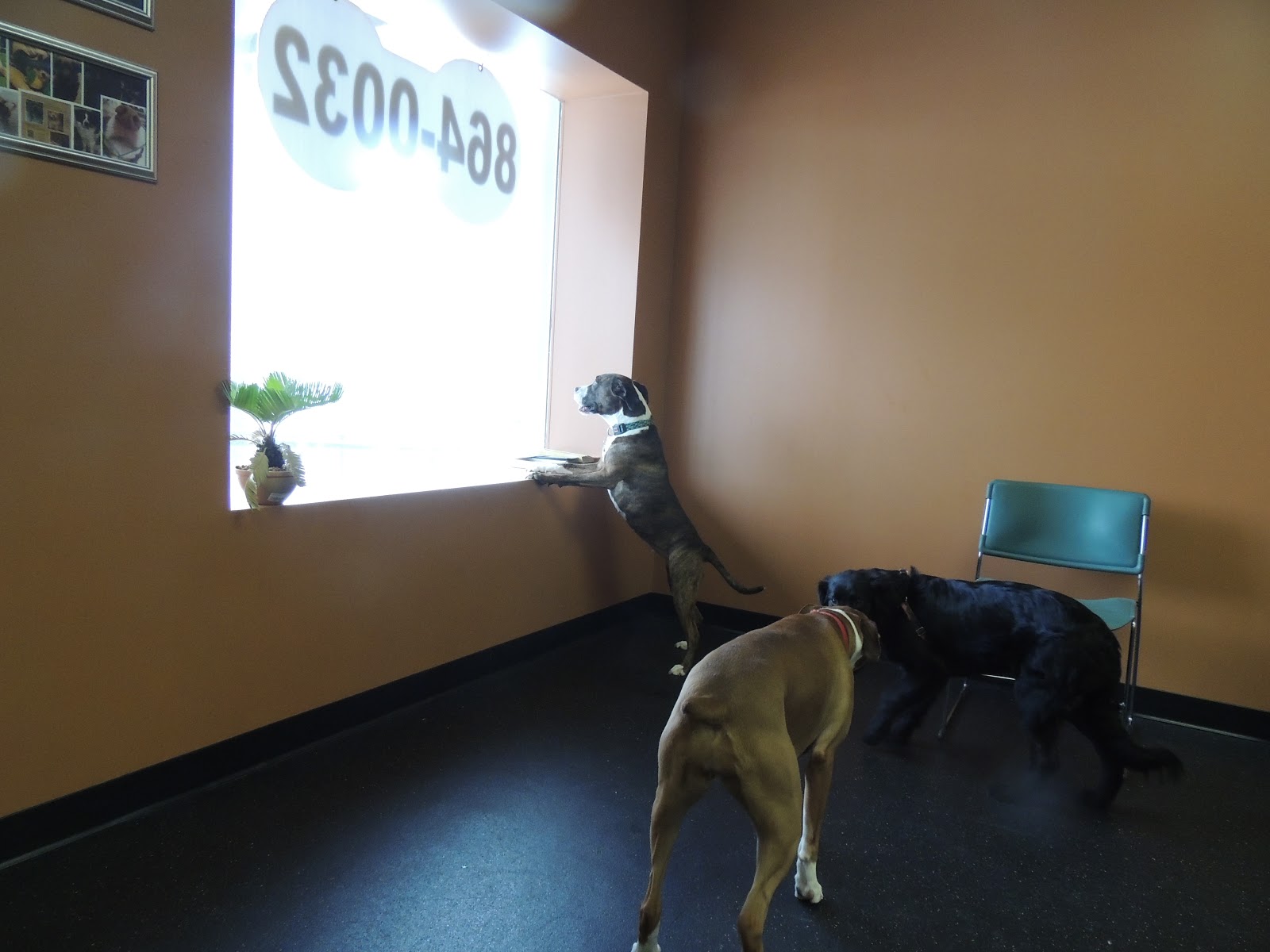 As tends to happen in a new house, I was still figuring out the "tricks."  My backdoor didn't always latch completely unless you pulled it shut hard.  So even though I had closed and locked it, it must have popped back open.  My storm door also had a latch problem and it wouldn't completely shut unless you carefully latched it (not usually a major issue on its own).  And then my gate also had a latch problem and didn't completely shut. 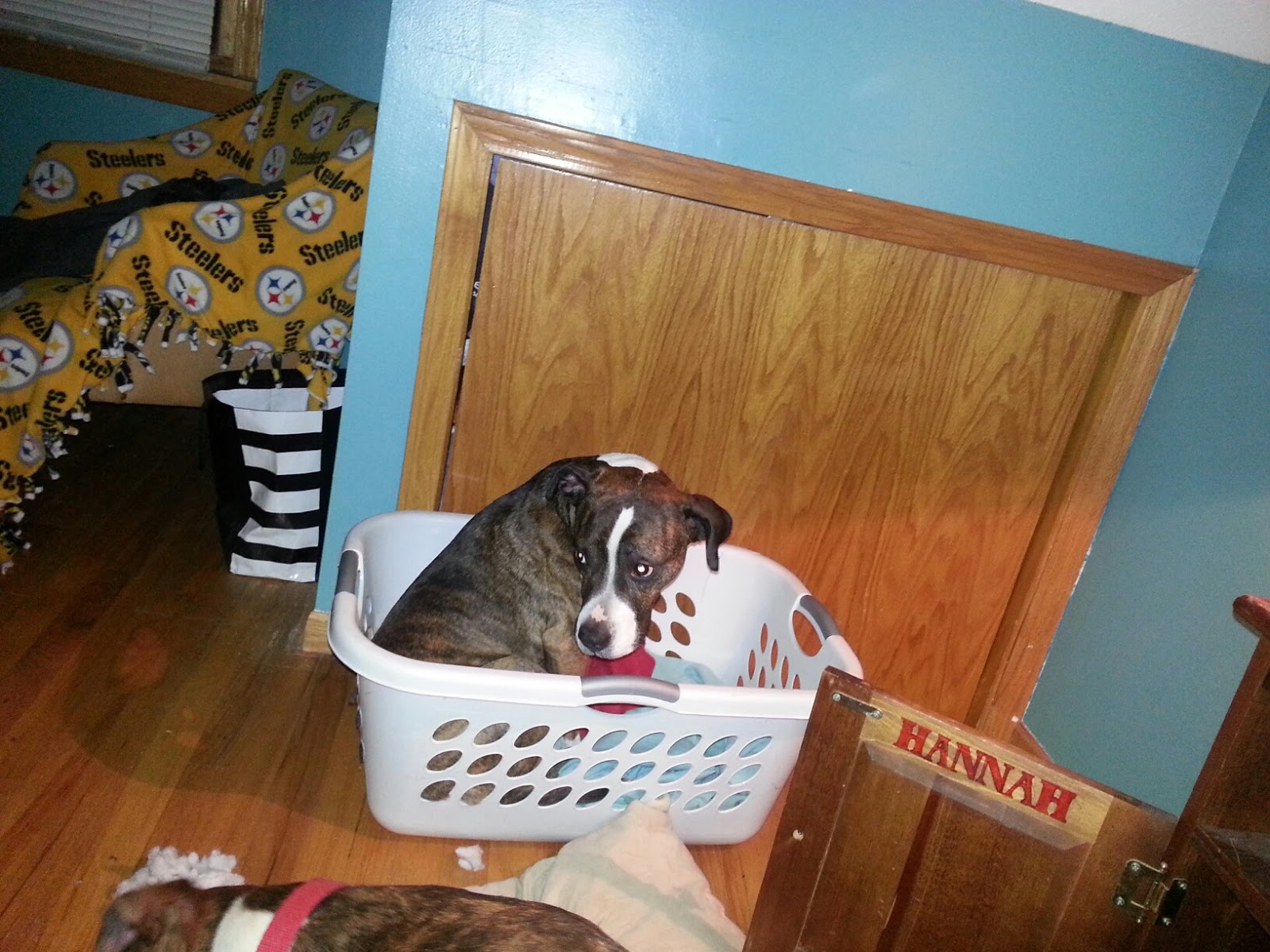 Apparently, she just walked right out of the house in an effort to come find me.  The scary part is that we live on a corner of two daily busy streets, so looking back it was incredibly dangerous.  Thank goodness out neighbor that found her wasn't afraid to take in a little pitbull!  Both dogs are always crated at home now, and we've fixed all the latches! 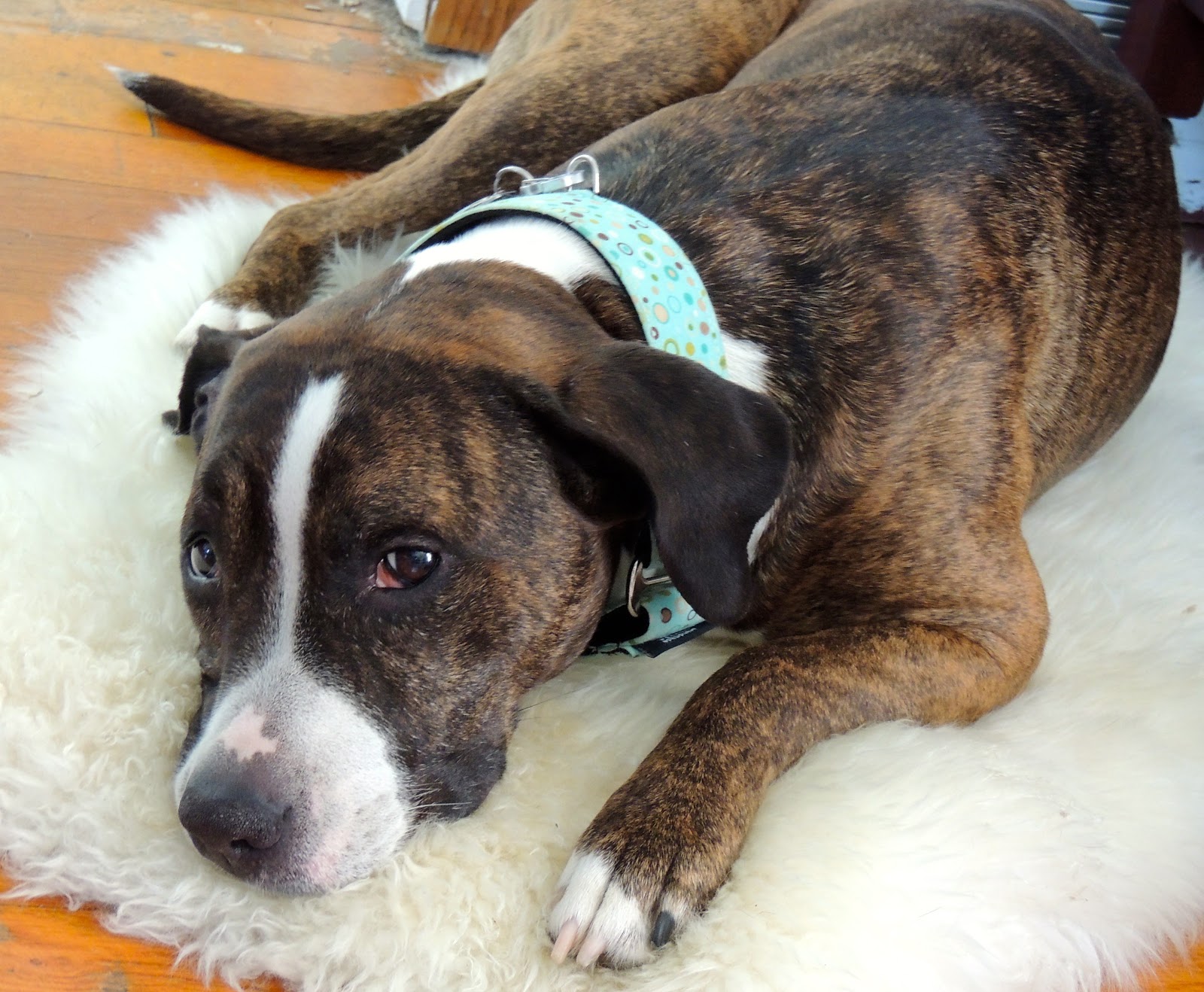 Has your dog ever escaped from home?
Posted by Hannah@Eriesistibull at 6:00 AM 5 comments:

Email ThisBlogThis!Share to TwitterShare to FacebookShare to Pinterest
Labels: crate training, running away from home, Tess

PEDs: Enjoying It When You Can

With days this week with temperatures at almost 20 below, it's easy to give up on winter. 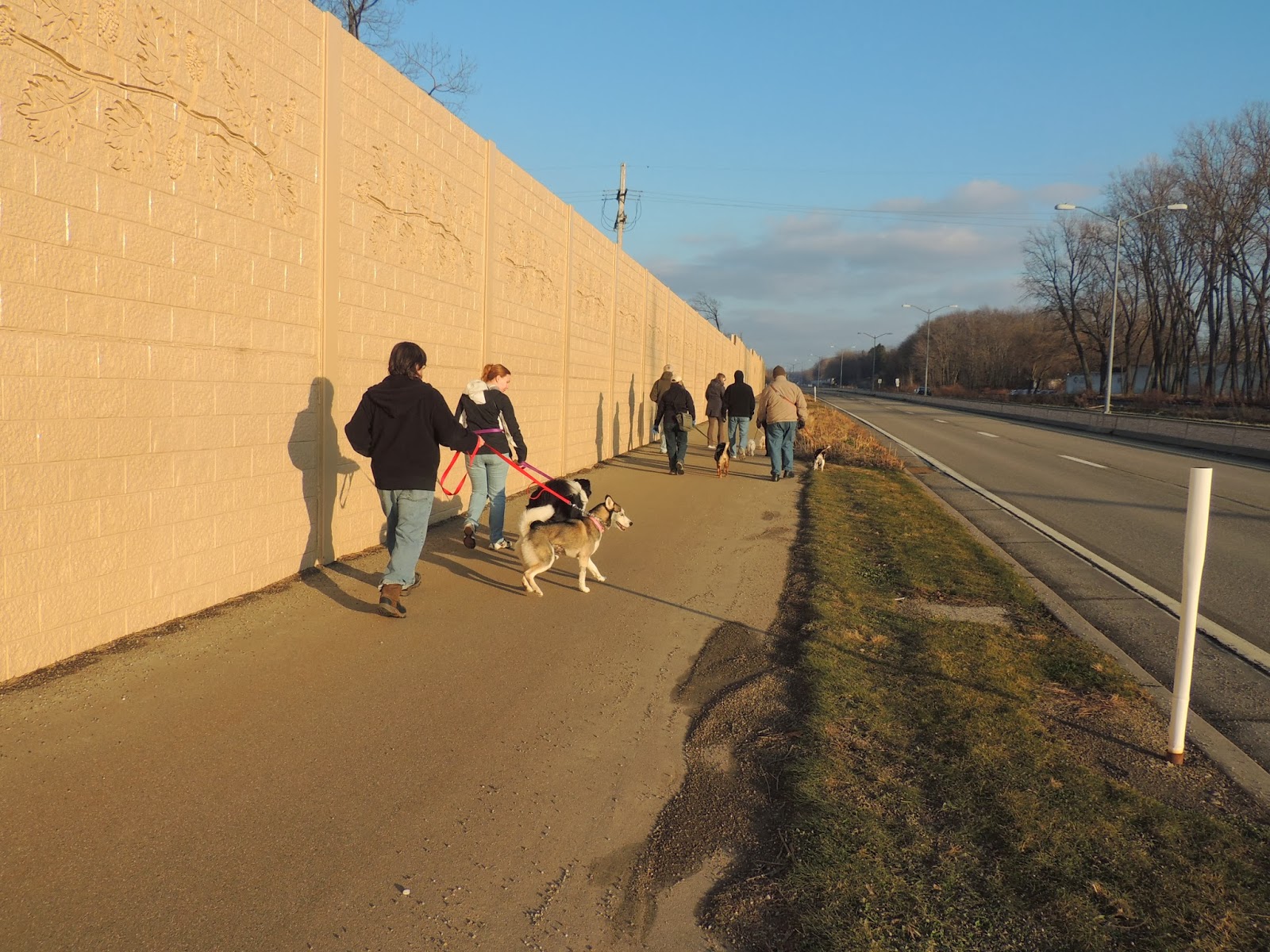 But then you'd miss out on days like yesterday -- sunny and 36. 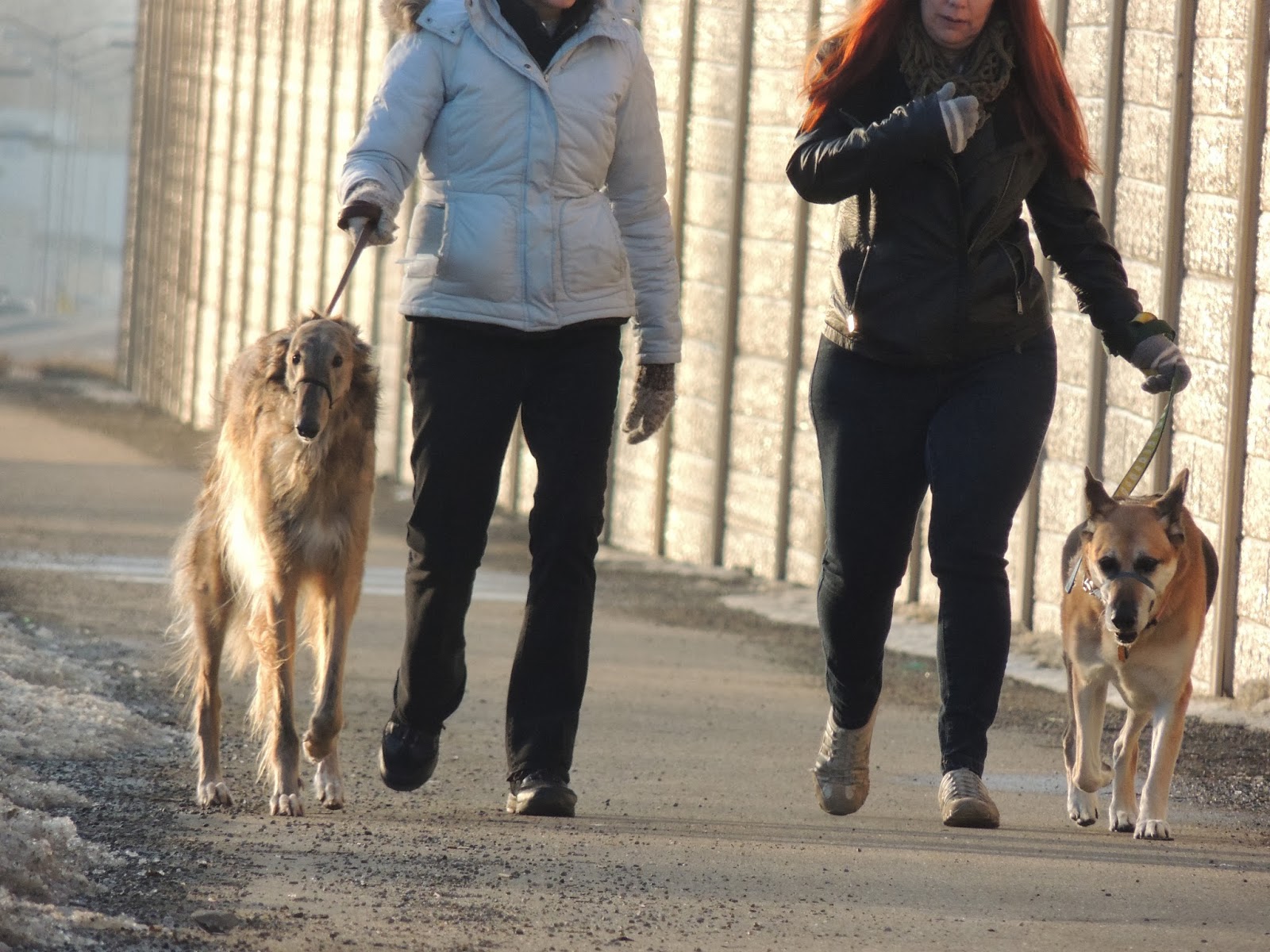 While most Erie days are cold, windy, and overcast, our group members know when to take advantage of nicer days. 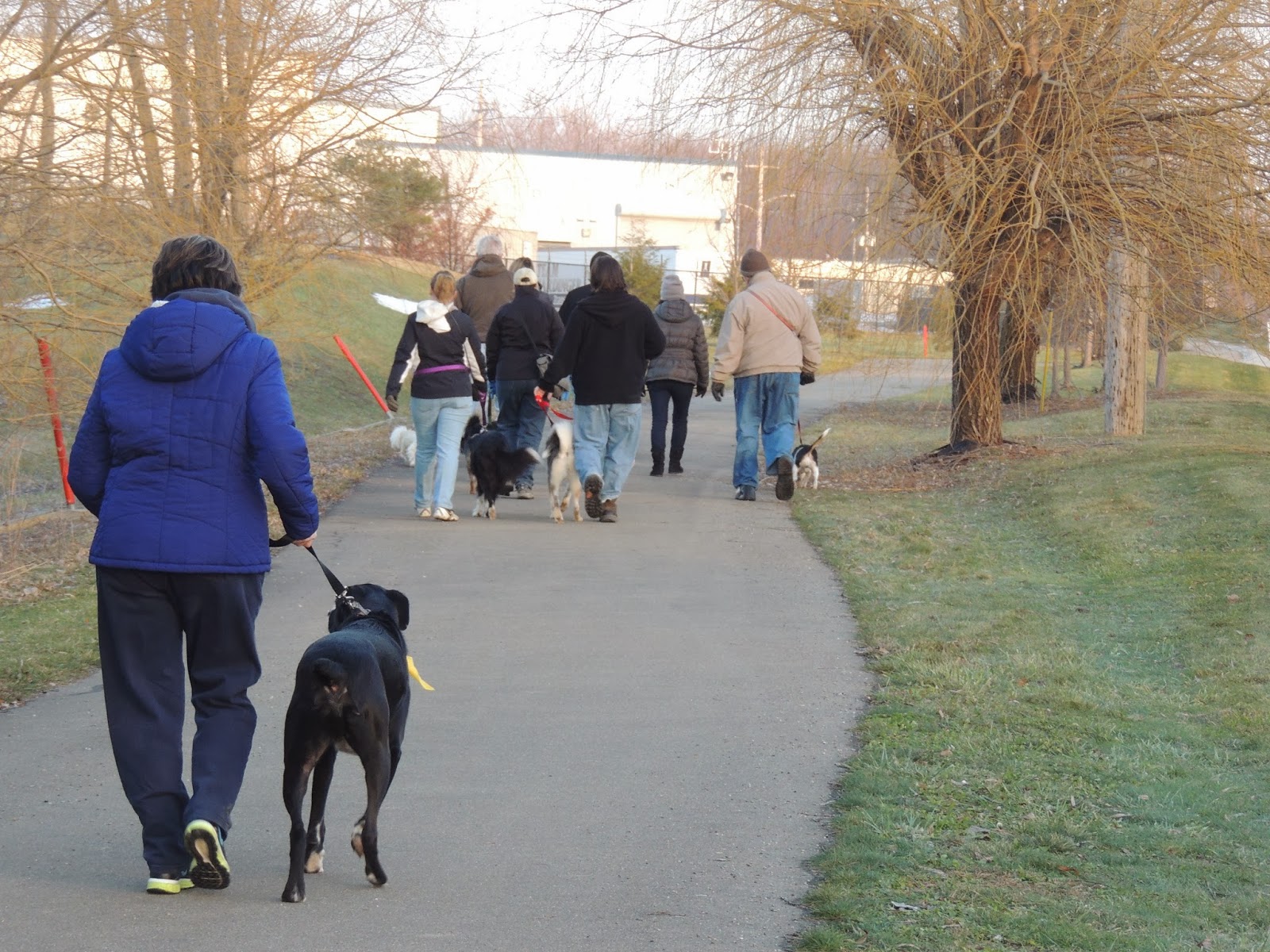 It was great to get out with our pooches and enjoy the sun!

Posted by Hannah@Eriesistibull at 6:00 AM 4 comments:

So I was really messed up on my dates this week.  Tesla's birthday was actually Tuesday and Wednesday was Edison's birthday!! 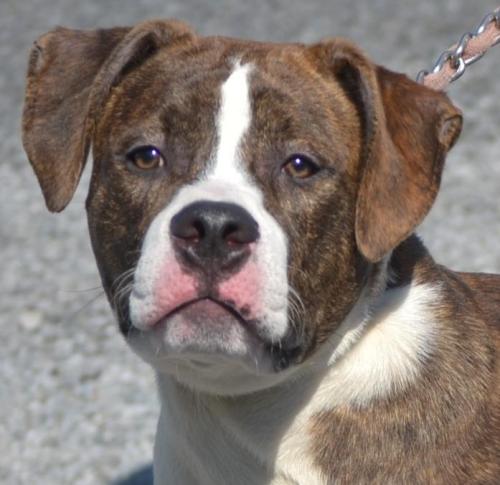 Either way, this big lug turned 3 years old today!  While Edi's "Gotcha" day is in October, his birthday calculated out to be just one day after Tess's. 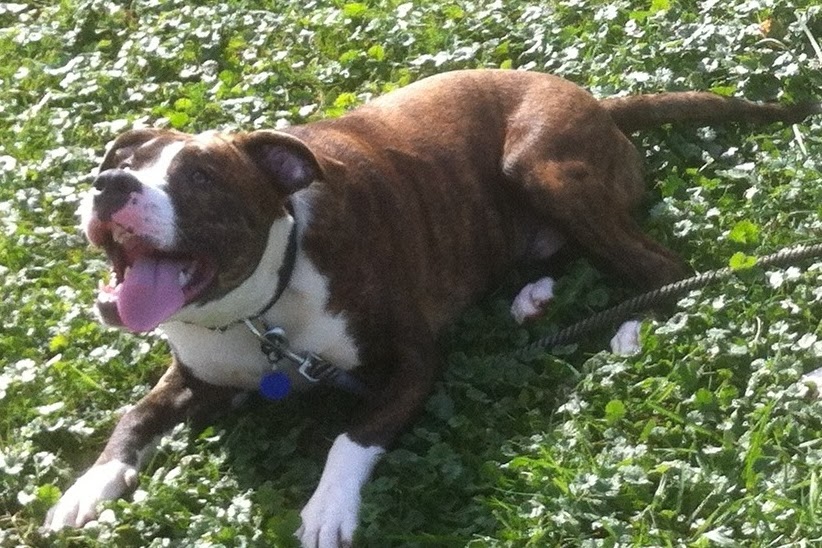 We knew he was ours when he flopped down on the shelter floor for a belly rub just a few seconds after laying eyes on us.  We've been through a lot with this dude, and we're still learning.  And while we're not wishing away his youth, we're looking forward to what another year of maturity (will that ever exist for him?!) will do to make this little start shine. 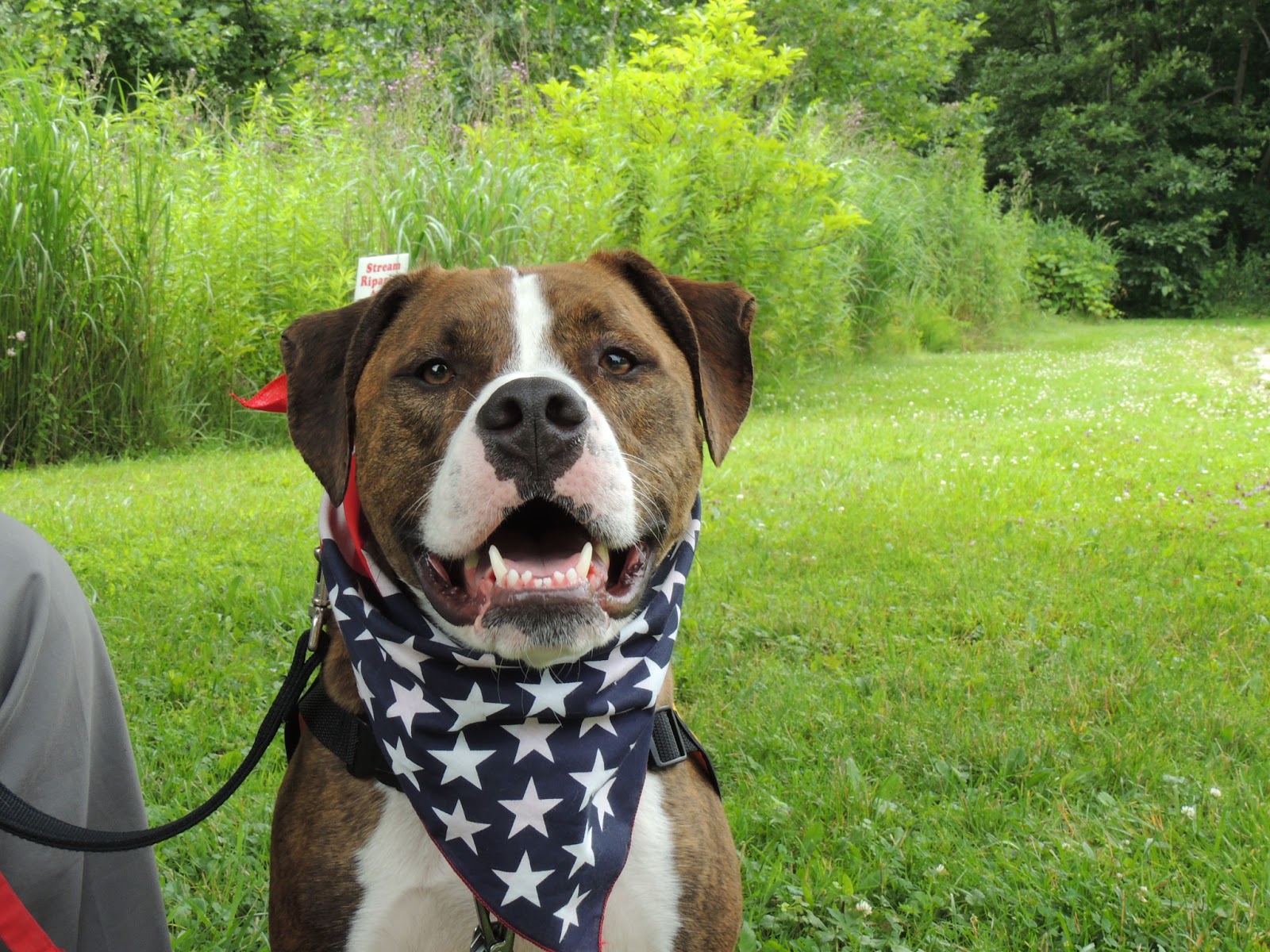 Do you celebrate your dog's birthday?
Posted by Hannah@Eriesistibull at 6:00 AM 4 comments:

Today is Miss Tesla's Gotcha/Birthday!  I brought her home 4 years ago today. 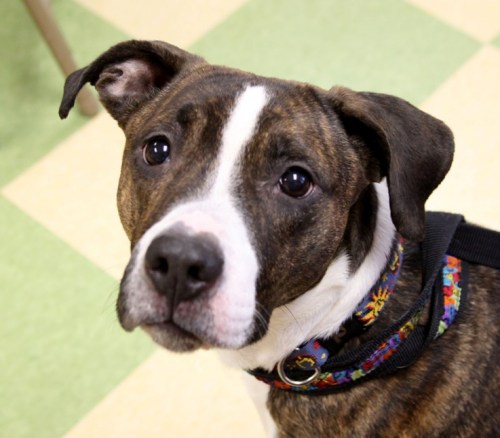 I knew she was mine when I took her into the meeting room at the shelter and the first thing she did, ignoring treats, was lick my face.  It was love. 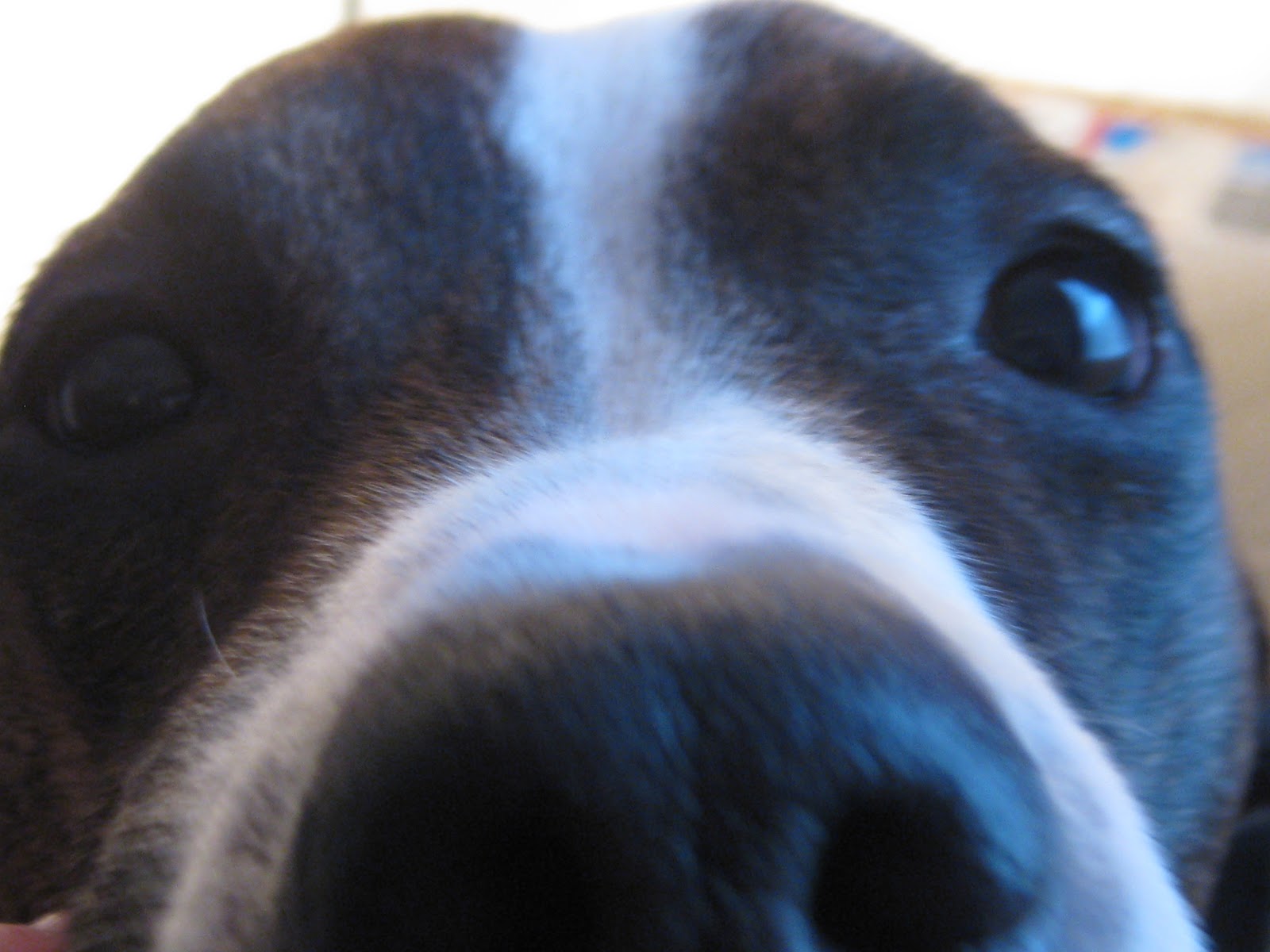 Taking care of the pooches this week in the "arctic vortex" reminded me of bringing Tess home that first day at the beginning of January.  During our first walk, she stopped 4 blocks from home and refused to go any further.  Luckily she was 20 pounds lighter back then because I had to carry her the rest of the way! 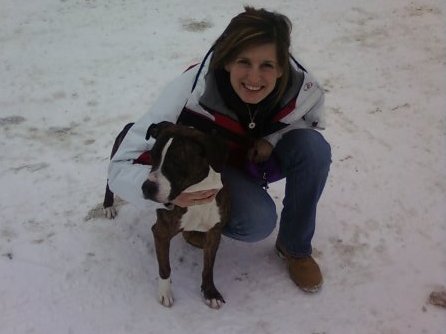 Happy Birthday, my love.  Here's to many more!
Posted by Hannah@Eriesistibull at 7:56 AM 5 comments:

PEDs: On Choosing a Location

January marked a new year and a new PEDs route.  We love changing up our routes each month not only to keep things fresh for our group, but it also helps us to discover new parts of our city. 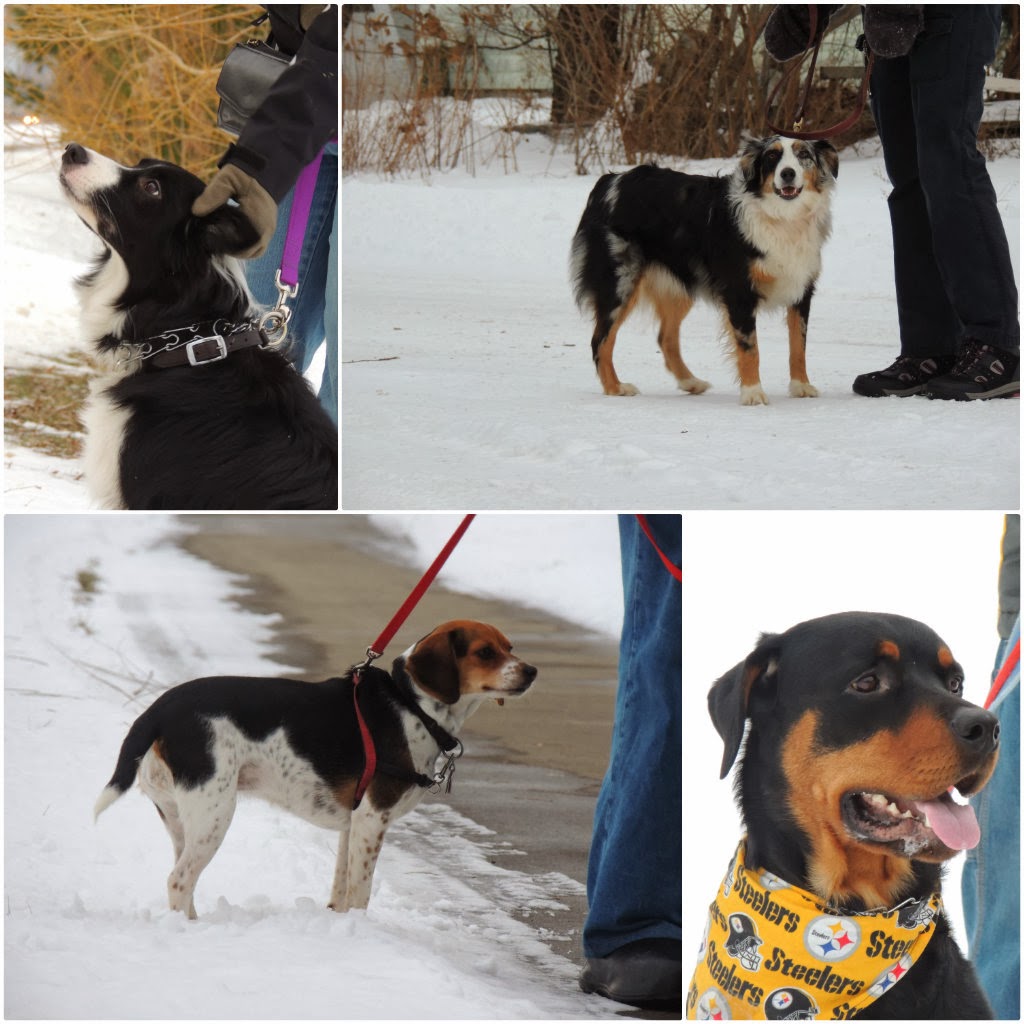 When choosing a location, we try to find somewhere that is less traveled, has nice sidewalks (that are plowed in the winter!), and good parking.  It isn't always easy finding a good loop, but that's where the adventure comes in! 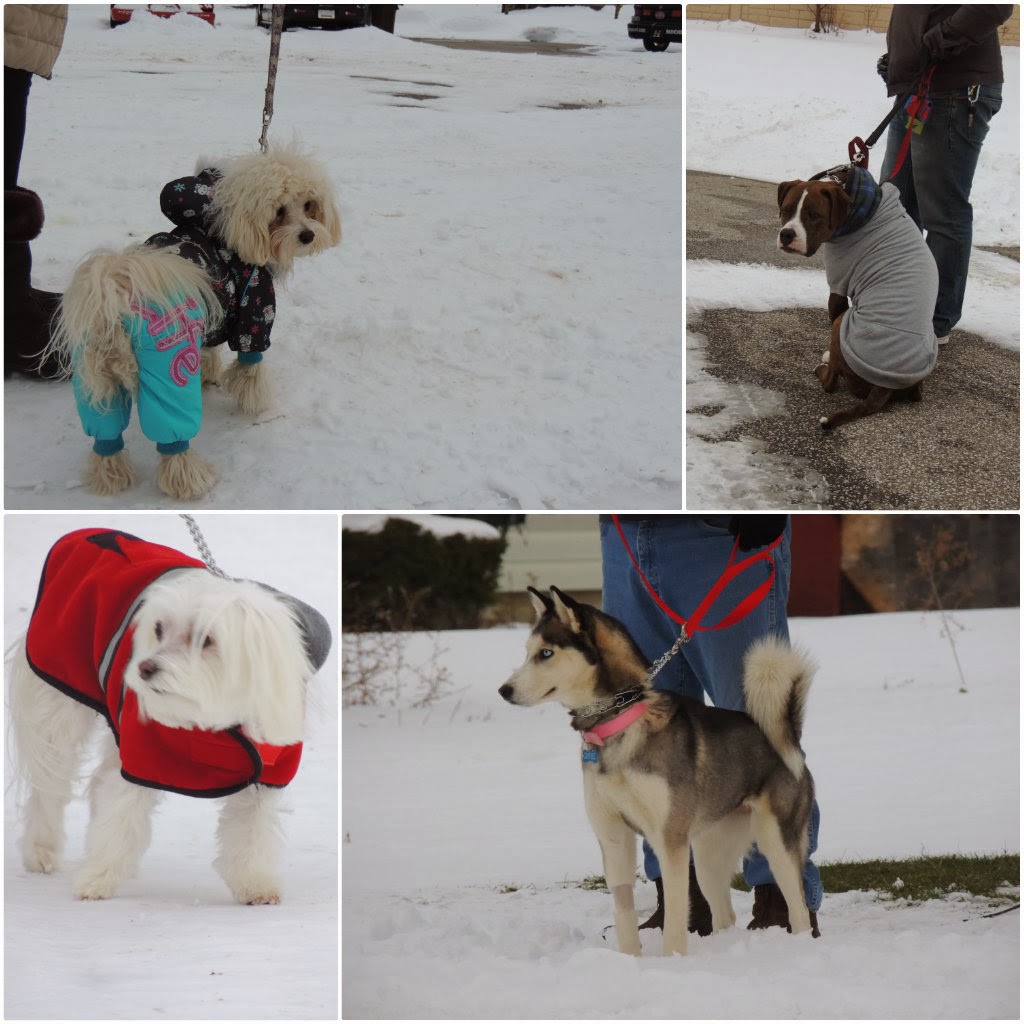 While this month's route is less scenic than previous routes, it is still a representation of our community. 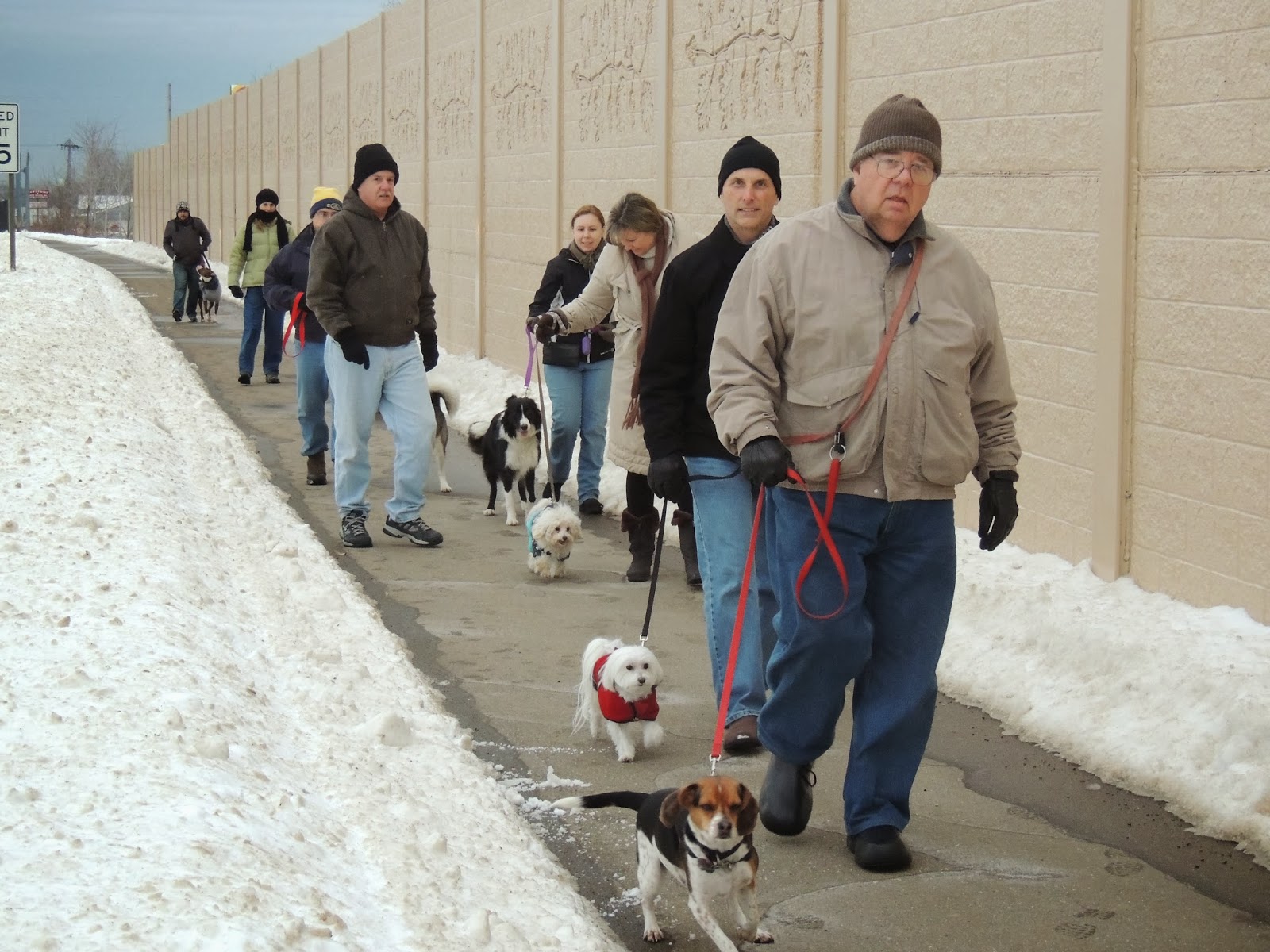 Where is your favorite place to walk your pooch?
Posted by Hannah@Eriesistibull at 6:00 AM 5 comments: