This week, Tess got to go on an extra-special outing...to the music store!! The local shop, World of Music, allows "well-behaved" dogs into the store.  We were really excited to try this out.

So when Sam needed to see about a gig bag, we grabbed our "well-behaved" dog Edison Tesla and headed down! 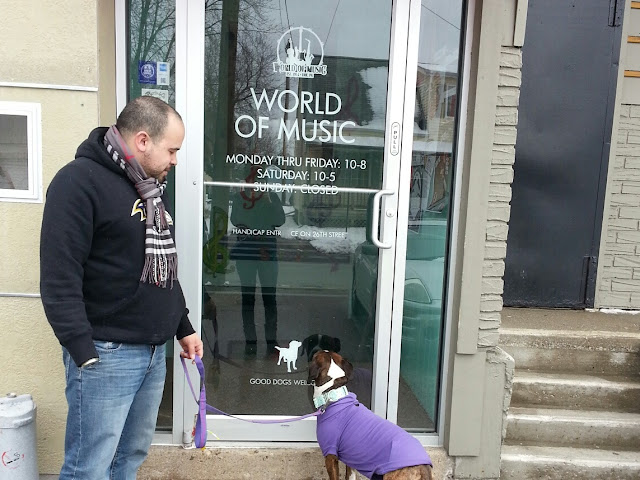 She was a big fan of the ukuleles - they were just her size! 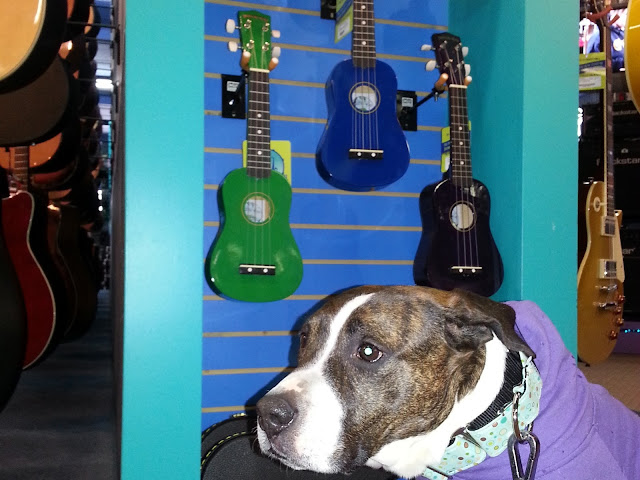 She listened to a wonderful pianist (no...we're not biased *wink*). 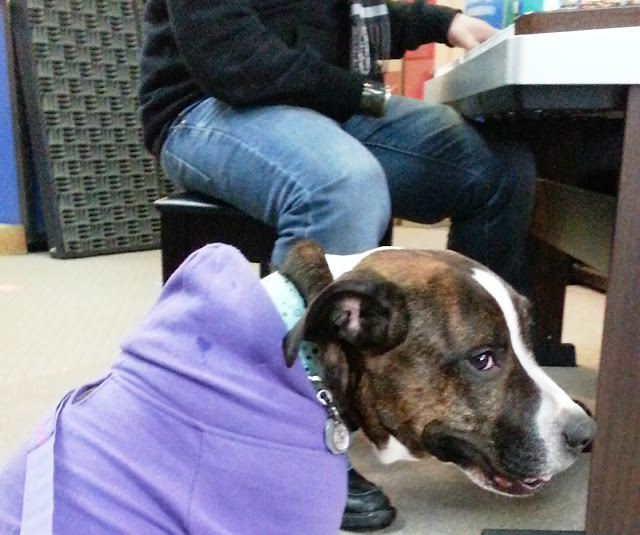 She even visited my favorite sections -- woodwinds! 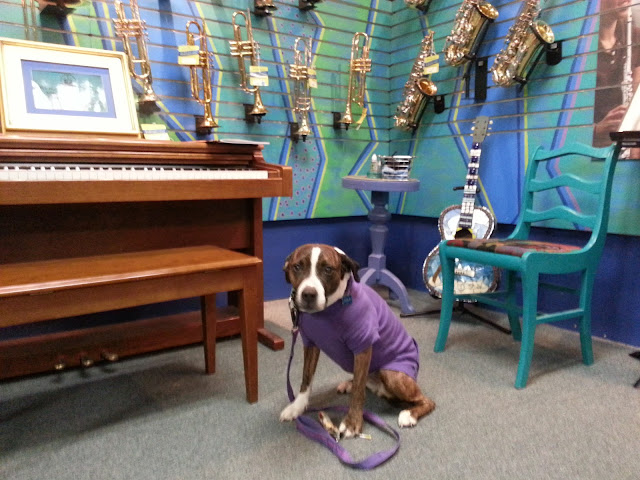 This sparkly drum kit caught her attention in the percussion section. 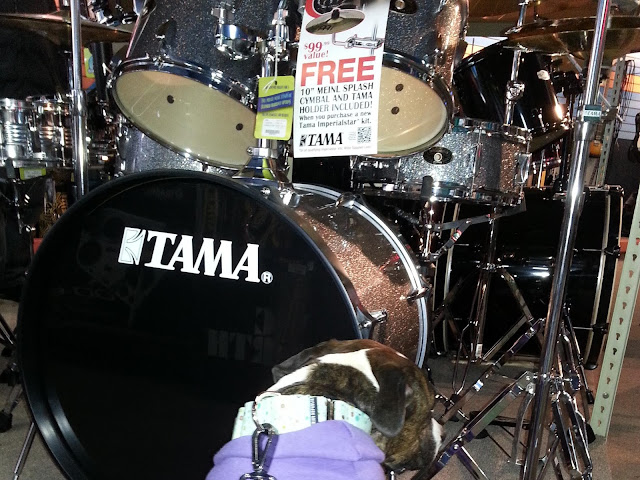 As did these nice "sticks". 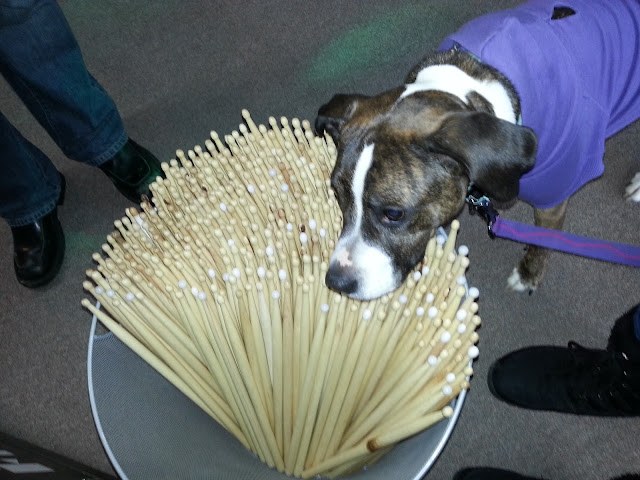 When we were checking out, Tess saw something that she had to have...a kazoo! 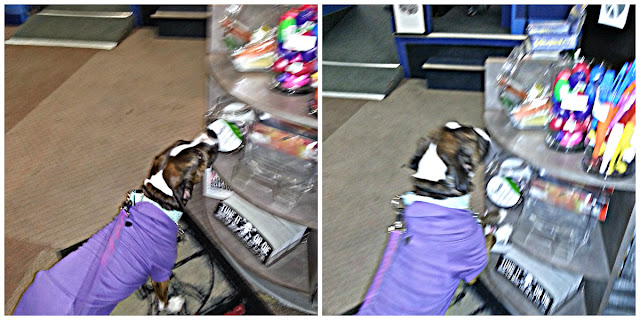 She soon realized that dogs are unable to play the kazoo and instead worked on her parlour tricks. 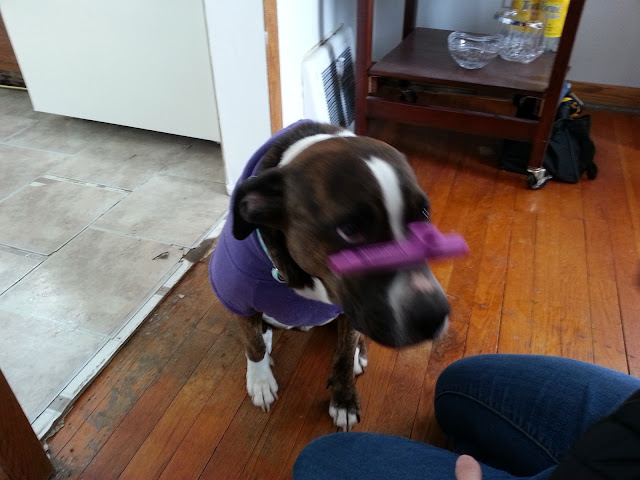 We had so much fun visiting World of Music, taking in the sights (and sounds!), and working on our kazoo-playing abilities. 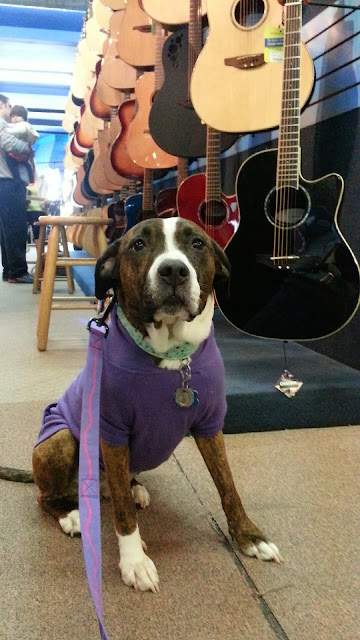 Are there any stores in your area that you like to take your pooches?
Posted by Hannah@Eriesistibull at 12:51 PM 4 comments:

Sorry we've been so distant lately.  We've been doing a lot of traveling for work, but we should be done with that for awhile.  So to celebrate...


For every new like we receive on our Facebook page during the next 2 weeks, we are going to be giving 1 pound of dog food to The ANNA Shelter. 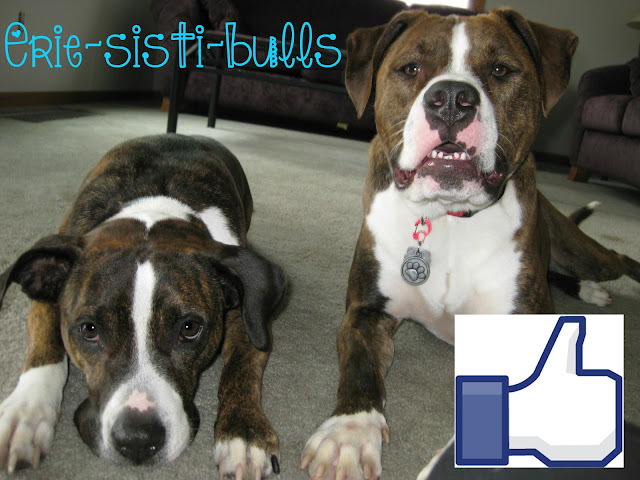 So if you already have "liked" us, make sure to send your friends our way and help us to feed some hungry pooches as they wait for their new homes!﻿
Posted by Hannah@Eriesistibull at 1:06 PM 3 comments: 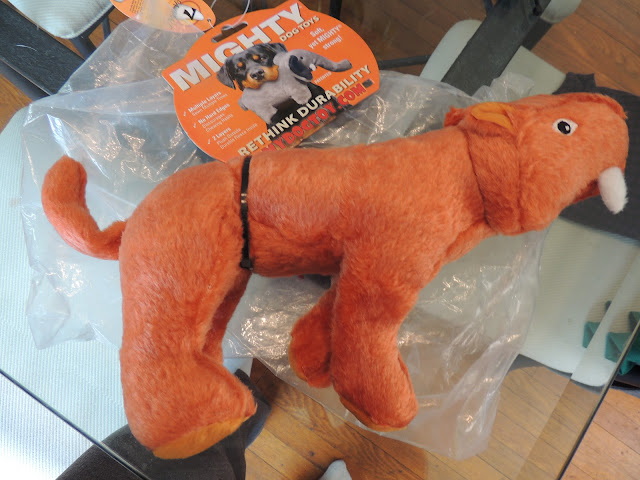 This guy is SO much smaller than Paisley. 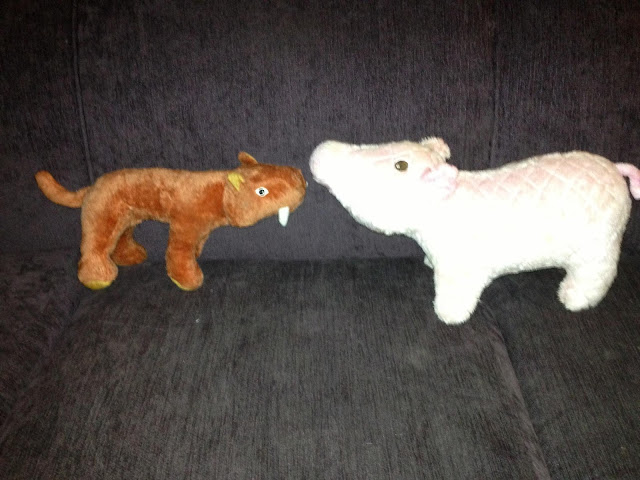 Ed was SUPER excited to get his paws on this guy.  We realized between Stan and P:ECO from our February BarkBox, Edison really likes stuffies. 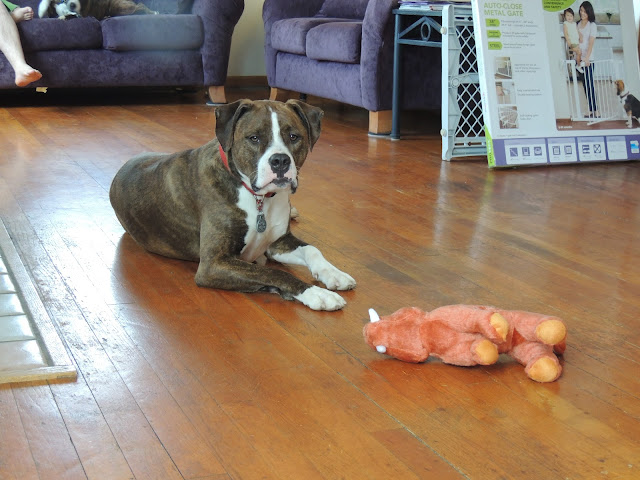 He had so much fun with Stan.  We really are working on getting him to be more gentle a la Mr. B, and he started to pick up on it pretty well. 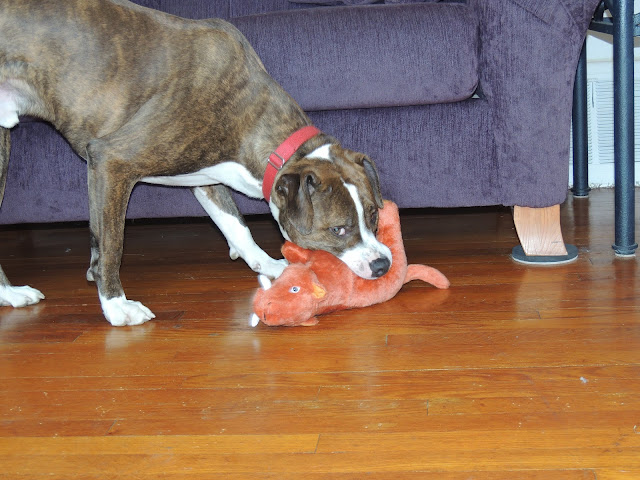 I think what he loves most about the stuffies is smushing their bellies and hearing the squeeker -- it's Tesla that find enjoyment in ripping them limb-from-limb de-stuffing them. Edwas really pretty content with being allowed to squeek their squeekers!


We did have the same problem we did with Paisley in that the same inside his legged ripped.  So for now, Stan will be spending some quality time in the office with Paisley until I can get it together and sew them back up. 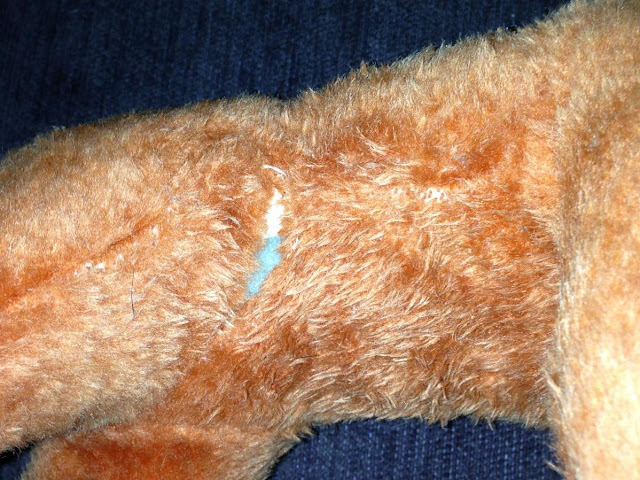 Does anyone have any tips for making strong stitches in stuffies?
Posted by Hannah@Eriesistibull at 8:05 AM 7 comments: 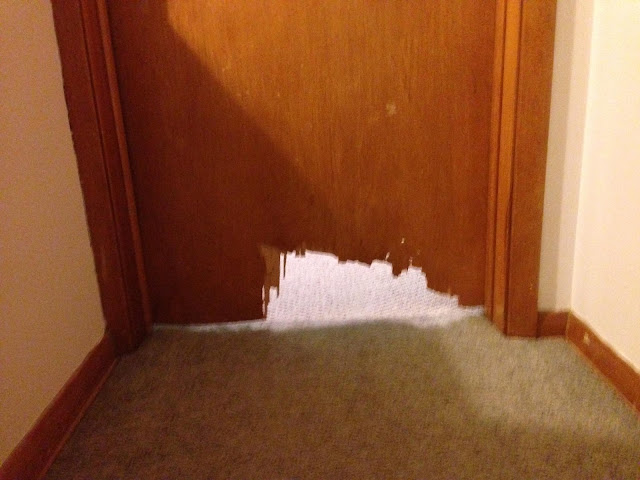 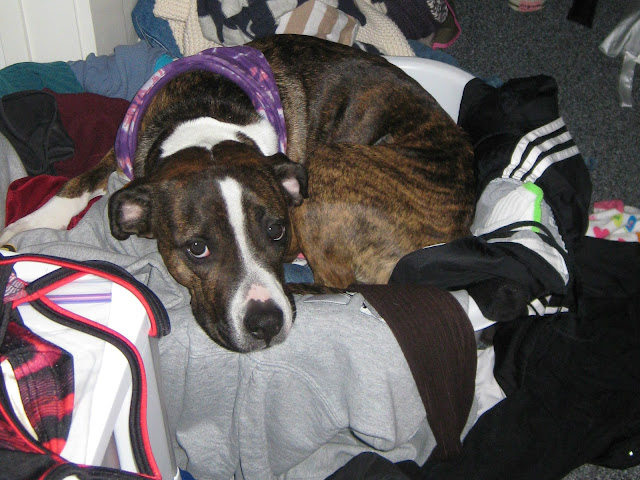 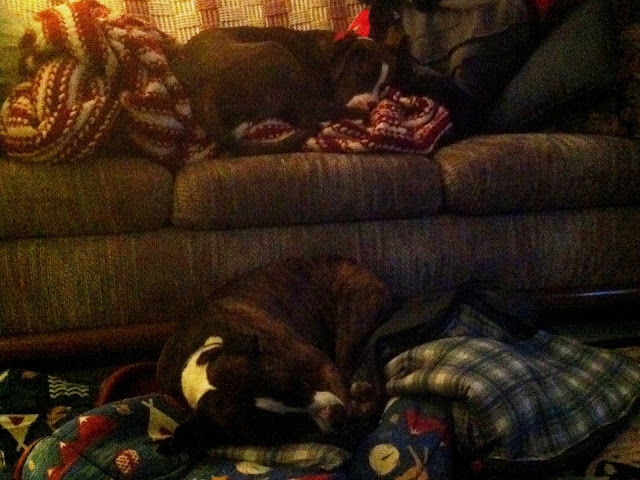 Posted by Hannah@Eriesistibull at 11:15 PM 6 comments:

Learning to Be Alone 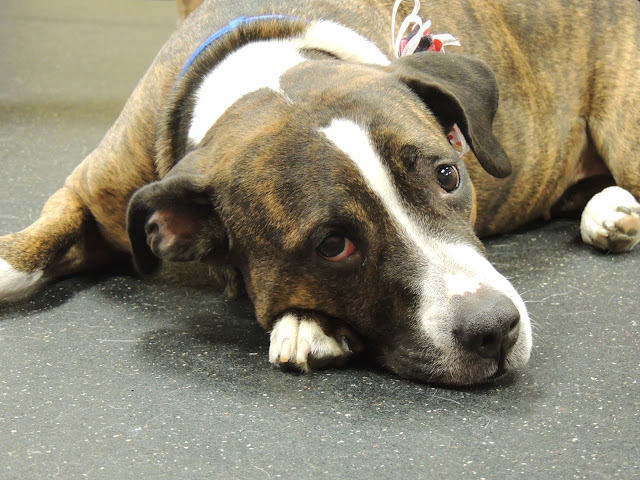 When I first brought her home, I was planning on crate training her.  This turned out to be a much bigger task than expected.

She was terrified of her crate.  She refused to go inside.  But she was (and still is) very food motivated.  So, I began to feed her beside her crate - just far enough away to make her feel safe.  The after a few days, I would inch it closer, repeating until after a couple weeks or so it was just inside the door. 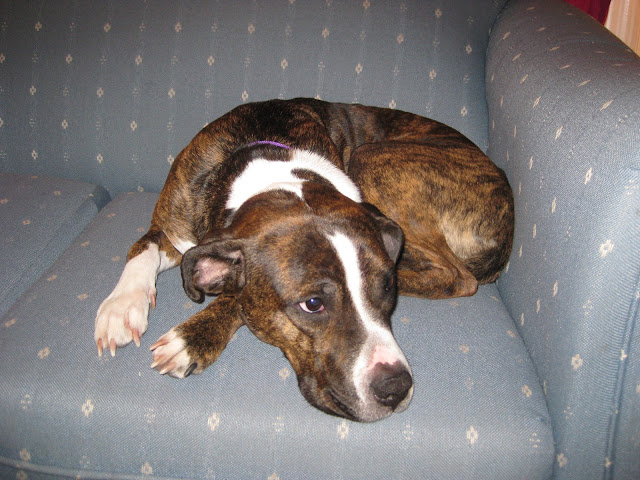 The next stage took a bit longer.  Once in the crate I inched it further into the crate - but at a much slower pace as before.  Another couple of weeks.  When I finally got the food dish all the way to the back of the crate, she would stretch as far as possible, keeping one paw just outside.

Once she would comfortably go completely inside the crate, I began shutting the door while she ate.  I didn't lock it at this point, but she never pushed her way out, so I quickly began locking it after her.  After a week of this, I began slowly leaving her in longer and longer while I stayed in the room.  Then I started leaving the room and staying in the house. 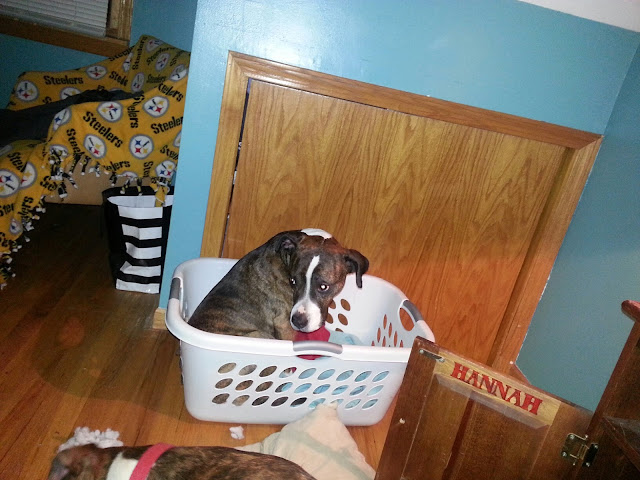 Luckily, I was in college at the time, so I was usually only gone for a few hours.  This way I could go back home and let her out between classes. 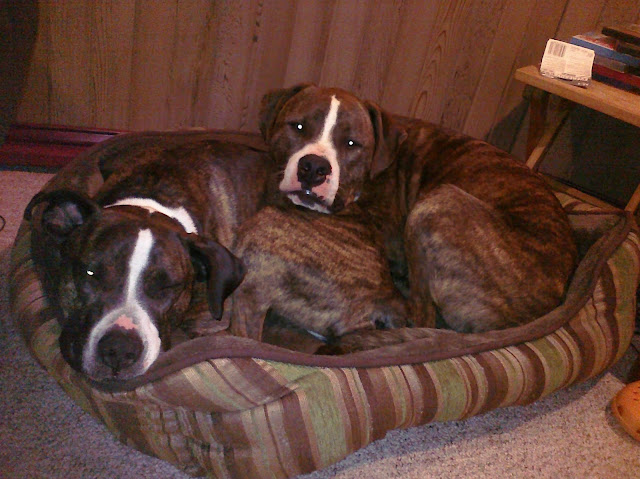 That's not to say she doesn't still have issues...but we're working on it!
Posted by Hannah@Eriesistibull at 2:49 PM 6 comments:

Why It's Important to Do Your Homework

Sam and I have been contemplating getting into the world of fostering.  We both work full-time and while that's not a show-stopper, adds a bit of complexity into the matter.  But we think it's a great way to help out and could be a really good experience for our resident dogs. 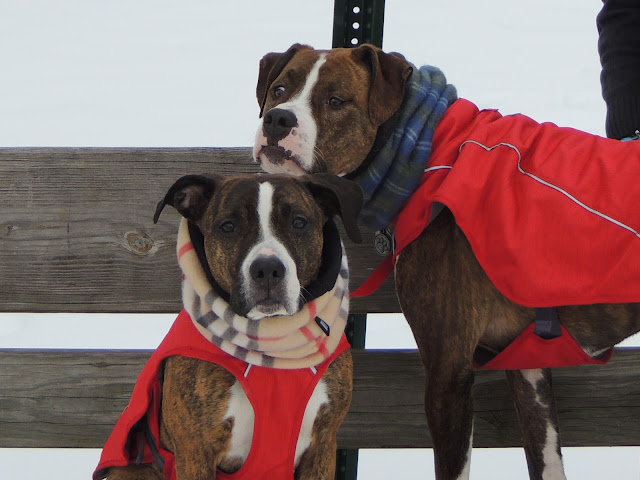 So when an opportunity came for a short-term foster, we were excited about the opportunity.  The foster dog already had a home lined up, so we didn't have to worry about having a dog indefinitely (which we totally understand is a major aspect of fostering), and we would only hold her for a couple of weeks.

The other major roadblock we have is Ed.  While he's making progress, we have no idea how difficult he will make our lives he will do with a new dog.  Tess also gets stressed out with lots of change.  It's manageable, but also something we need to take into consideration.  The way we figured is the first couple weeks should be the hardest, so having a dog only for those hard weeks would give us a good idea if we (the humans and dogs)were up to the task.  If not, we know for the future and can continue to work on it. 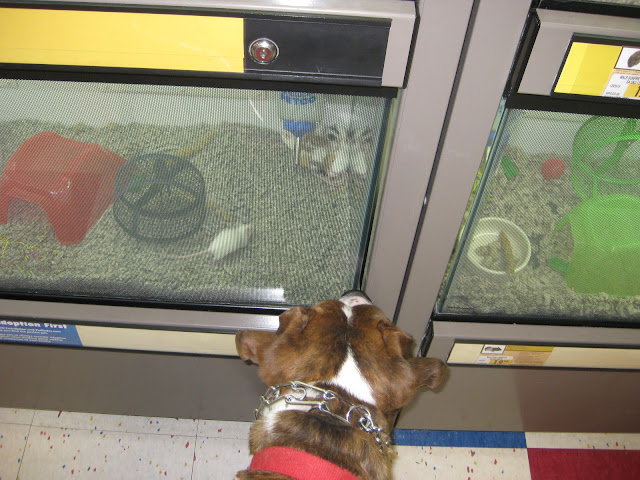 I had been following the rescue through which we were planning on fostering for a few years.  They are located about 2 hours away, so I had never had the opportunity to make it to an adoption event, fundraiser, etc., but had read good things on their website and facebook page.

The day we were to get our new foster, Sam did a quick google search to find the foster's page we had been looking at.  He clicked on what he thought was her page and found a website of grievances and allegations against this rescue.  We were floored!

We discussed what to do.  We had already given our word, but did we really want to be involved in something that, even if it wasn't true, had this much bad press? 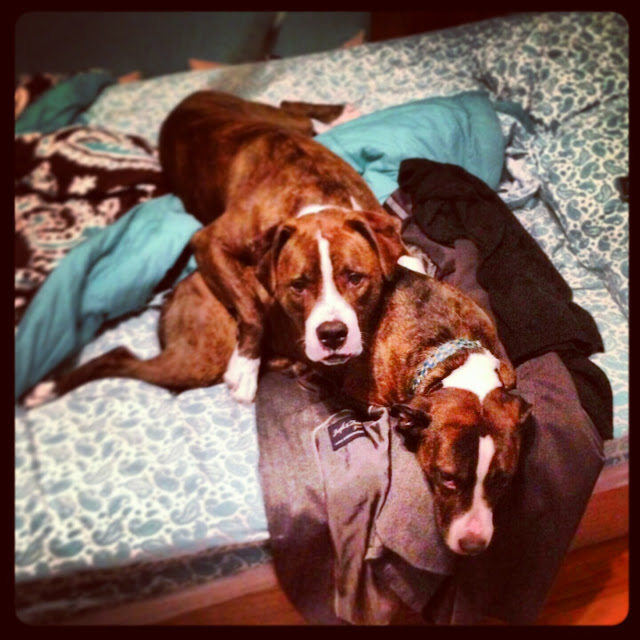 The answer was no.  As much as we wanted to help out this dog and test out fostering, we did not want to be involved with this rescue.  I was upset; I felt stupid; and I felt like I had let the dog down.  But we're so thankful that we didn't get wrapped up in a bad deal and..  Additionally, I am learning from my mistakes and we are starting to compile some "checks" for any future rescue we might volunteer for.

Do you have any advice in checking out a new rescue?  What did/do you look for?

***This is in no way to say that the allegations put against this rescue are true.  I have done no personal research into the matter.***
Posted by Hannah@Eriesistibull at 10:48 AM 6 comments:

UPDATED: Jumpin' on the Bandwagon

We are taking advantage of the 10% discount being offered by Chick & 'Bug to get our very first Sirius Republic collars!!

We've been eyeing these up for sooo long.  The reason we've been waiting?  It's so hard to choose!!

So, we've narrowed it down to five choices.

Help us decide!!  Leave a comment and let us know which ones we should pick!!

**UPDATE**  Thanks to everyone who gave their input.  Tesla & Edison are busy crunching the numbers and figuring out which designs are the winners.  Check back soon to find out!!
Posted by Hannah@Eriesistibull at 12:53 PM 7 comments: